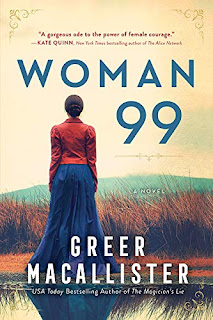 The story: It's the mid 1800s, and Charlotte's beloved older sister, Phoebe, suffers from what appears to be bipolar disorder. Her parents commit Phoebe, who they consider to be an embarrassment to the family, to an insane asylum. Charlotte absolutely cannot let Phoebe rot away there, and she hatches her own insane plan: she'll get herself committed to the asylum so that she can bring Phoebe home. By appearing to be suicidal, Charlotte gets sent to the asylum. She is shocked and horrified to discover that many of the women have been committed merely because they were somehow not "proper" women: they suffered from postpartum, loved the "wrong" person, or perhaps their husbands were just tired of them. She learns their stories while searching for Phoebe, and she also considers her own life and pending wedding.

My reaction: I've always been both drawn to and terrified of books about asylums. The tension is real! I grew up on Seneca Lake, roughly across and down some from The Willard Asylum for the Chronic Insane, and Willard, as we called it, loomed largely in our young imaginations. I used to terrify myself by imagining that an escaped inmate would row a boat across the lake and land on our beach. Anyway... it's always been a strange fascination of mine. The thought of Charlotte willingly entering an asylum was both fascinating and unbelievable to me. I enjoyed very much the descriptions of the various wards, each focused on a different "ailment": love, silence, oversexualization, melancholy, etc. And I loved that Charlotte quickly recognizes that so many of the women in the asylum are there simply because they are inconvenient in some way. This is basically storage for women who dare to buck the system. There were definitely times that the book was too repetitive and drawn out, and some scenes seemed quite implausible; however, I found the book ultimately satisfying. For a book about an asylum, it was not graphic nor horribly disturbing. Recommended! 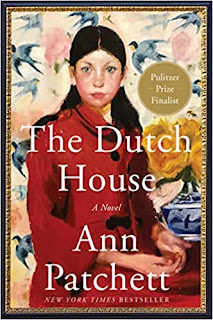 The Dutch House by Ann Patchett
The story: This is a marvelous story of a brother, a sister, and their rightful inheritance, the Dutch House, a grand house purchased by their father and ripped out from under them at his unexpected death. For the rest of their lives, Danny and Maeve try to figure out what went wrong and how to get it all back. They move forward with their lives when they are apart, but each time Danny and Maeve get together, they pick apart every detail of the events that led up to their father's death. Other people in their lives fill in details now and then, and as they leave middle age, the siblings finally have some closure as questions are answered.
My reaction: Ann Patchett is just the real deal. What a storyteller! Everything about this works together. There are no loose ends, no wondering for me. The characters, including the house itself, are all richly drawn. It's somewhat of a Hansel and Gretel tale, with an evil stepmother, a kind but distant father, and that irresistible gingerbread house that draws them back again and again. I love Ann Patchett, and I love this book. 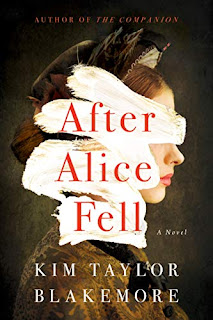 After Alice Fell by Kim Taylor Blakemore
The story: It's just after the Civil War, and Marion has spent the past year as a battlefield nurse. While she was gone, her beloved sister, Alice, was committed to an asylum by their brother and his wife. And then Alice fell off the roof of the asylum and died. Everyone assures her that Alice committed suicide, but Marion knows she would never do that. So how did Alice get to the roof, and who pushed her? Let it go, her brother and his wife tell her, but she cannot rest until she finds out how Alice fell.
My reaction: Eh. Well, first I have to say how weird it is that I read yet another book this month set partially in an asylum in the mid-1800s. Between this and Woman 99, the latter is far more interesting. This one had so many missing pieces. It was terribly disjointed, and at times I felt as if I were in an institution. None of the character, except the dead Alice and the nephew, were particularly likable, and I like books with likable characters. I'd give it a solid 3.5. 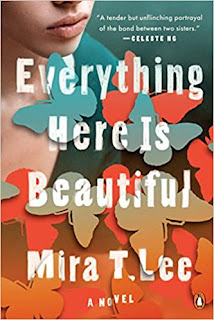 Everything Here Is Beautiful by Mira T. Lee
The story: Lucia and Miranda are Chinese-American sisters, fiercely loyal to each other. Miranda, as the elder sister, is protective and motherly toward Lucia, who is carefree and impulsive, a girl who thoroughly enjoys each moment of life. Both sisters are independent and brilliant, but as Lucia heads into her 20s, she develops a mental illness. Only Miranda knows about it for awhile, until Lucia marries Yonah. Within the first year of their marriage, the "serpents" begin tormenting Lucia. The voices in her head drag her down, and Miranda is there to rescue her. Their relationship suffers, as Miranda becomes more and more insistent that Lucia take her medicine, and Lucia resists. Lucia spends the next decade or so in and out of hospitals, in and out of relationships, and in and out of motherhood. Miranda is walks the tightrope of caring too much and letting go.
My reaction: What are the chances that I would read yet a third book centering on two sisters, one of each pair with a mental illness, in the span of a month? This was totally not on purpose; I just grabbed the books when they became available on the library's electronic reading system. This is my favorite one by far. This book is so beautifully written. Each of the characters — Lucia, Yonah, Manuel, Esperanza, and Miranda — is richly brought to life. We are especially submerged in Lucia's world— from vibrant and then impoverished neighborhoods in NYC to rural Ecuador. Lee's  perspective on various immigrant experiences in the U.S. was powerful and so lovingly written. I especially appreciated the section on Lucia and Manuel, an Ecuadorian immigrant who is constantly afraid of being deported. Lee paints all her characters with such tenderness and such vivacity. Miranda and Lucia are a classic pair: the Martha and Mary, the steady worker and the prodigal daughter, one responsible and one reckless; but both fight demons in their own way. Highly recommended. These characters will stay with me for a long time. 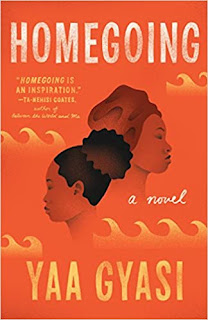 The story: This is a sweeping story of a family through many generations and across continents, beginning with the half sisters, Effia and Esi, who are born into different villages in Ghana in the 1700s. One sister is sold into slavery; the other is taken as an Englishman's Ghanian wife. (He has another back in England.) From there, the novel proceeds through subsequent generations of each sister's line, telling a different  family member's story up until present day. One line goes through Ghanian warfare, the slave trade, and colonization; the other sister's descendants are enslaved people on Southern plantations, convicts in the coal mines, part of the Great Migration, and all the way to today. Ultimately, the two lines meet again in a powerful, hopeful conclusion.

My reaction: Brilliant. Heartbreaking. Beautiful. Eye-opening. This is a tremendous undertaking on the part of Gyasi (this is her debut novel), and she absolutely succeeded. Each character's story is told with such love and devotion; it's as if she freed dozens of voices to speak and say, "I am here. I lived, and I loved, and I have a story you need to hear." I wish I had read this in an actual hard copy book rather than on my Kindle because Gyasi includes a wonderful family tree at the beginning that I should have returned to again and again, to keep all the characters straight. I am too lazy to do this on my Kindle. That is a small, reader's issue that has nothing to do with the actual novel itself, which is astonishing. Read it. Pay attention. And then tell someone else to read it. Truly incredible.
And that's it for February! I've started March with Fredrik Backman's Anxious People. So far, so good!
Linked up with It's Monday! What are you reading? at Book Date.
Posted by Sarah at SmallWorld at 12:38 PM

Email ThisBlogThis!Share to TwitterShare to FacebookShare to Pinterest
Labels: It's Monday!

Interesting that main premise of Woman 99 is the same as a jumping-off point of a book I read called One Thousand White Women- also set in the late 1800 / early 1900's and the main character was put in an asylum by her family because she had flouted convention and chosen to live with an unsuitable man, and I believe they weren't married. I wonder if it was a very common thing in that time.

Jeanne -- I read that book years ago, yes! And Woman 99 definitely discusses how many women were put into asylums because they flouted convention.

Wow, what a great reading month for you! So many wonderful books. I loved The Dutch House, too - I listened to it on audio, read by Tom Hanks, who completely embodied the main character/narrator!

And I am dying to read Homecoming - have heard so many great reviews!

Hope that March is off to a great start for you, too!