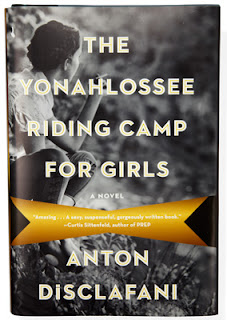 This hasn't been the most thrilling year for reading nor reviewing books. Few novels this year stand out for me: Paula Hawkins' Girl on the Train is one, and Anton diScalfani's The Yonahlossee Riding Camp for Girls will definitely be another.

I didn't know what I was getting into with this novel. I thought it was a coming-of-age novel, maybe even a light read. I didn't expect this dark, mesmerizing novel of loss, rejection, and perseverance.

Set in the 1930s, the story centers on 15-year-old Thea Atwell, who has done something bad. We don't know what she's done, only that it involved her twin brother and their cousin, who was like another brother to them. As the book opens, Thea is being deposited at Yonahlossee Riding Camp, which is really just a name for a boarding school for rich girls—or, in Thea's case, a home for girls who have been bad. Her parents can't stand to be around her anymore, and sending her off to school seems like the only option.

Thea has never been around anyone besides her family: her parents, brother, aunt, uncle, and cousin. She's never had a girlfriend, never attended a fancy dinner, didn't know the codes between girls or that they even existed. She's thrown from a comfortable home in which she was the beloved only daughter into a world she didn't know existed.

And she loves it. She loves being part of this sisterhood and, most of all, loves that she gets to spend hours and hours each day riding her horse. She also loves that she is the best rider in the school. But Thea has an insatiable need to be loved and to prove that she is a person of value— she needs to reclaim her position as one who is prized. Why did her world fall apart back in Florida? Why did her parents toss her aside like trash?

Flashbacks lead up to the story of  the Big Event that sent The and her family into a downward spiral. As Thea pieces together what she did wrong, she continues on a similar path at the boarding school. Thea is a complex protagonist, bent on self-preservation but mired in self-destructive behavior. She's selfish with flashes of compassion, unstable yet admiring of stability. She's a 15-year-old girl who doesn't know how to contain her passions and enjoys the power she has over men.

While Thea is a strangely likable character is spite of her self-absorption. The novel is graphic and violent at times, but it's incredibly compelling. I stayed up way past my bedtime a couple of nights reading it. If you're in the mood for something complex and a little dark, this is a great choice.
Posted by Sarah at SmallWorld at 2:57 PM No comments:

Book Review: The Girl Who Fell From the Sky 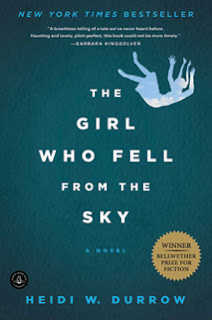 Heidi Durrow's The Girl Who Fell From the Sky is a survivor's story. Rachel is the 11-year-old girl who fell, except she didn't fall accidentally: her mother, chased by her own demons and bad decisions, takes flight with all the kids from the top of a roof. Rachel lives.

The daughter of a white Danish woman and a black GI, Rachel now has to learn who she is. Is she black or is she white? Is she poor Rachel or lucky Rachel? And why did her mother do it?

After recovering from her severe injuries, Rachel goes to live with her black grandmother in Oregon. This is a whole new world to her, and her sense of "otherness" is almost more than she can bear. She struggles to find her place in this new world and also to attempt to grasp why her mother could possibly have thought that killing herself and her children was the only solution. The story of Rachel's mother is told through the points-of-view of the grandmother, the neighbor boy who saw the family's fall from the roof, and her mother's employer, who packed up her possessions and read her journals.

The story of Rachel's mother is really never fully explained, but I was okay with that, mostly. I didn't feel like her story was fleshed out enough to come even close to "justifying" her crime, but I suppose that's another story. Likewise, why Rachel's father never comes back for her isn't really clear at all, and I was mostly okay with that. Mostly.

That said, Durrow's writing is wonderful, and Rachel's story is intriguing enough on its own. Perhaps the novel would have lost some of its lovely, sparse narrative had the stories of the parents been deeper. I definitely recommend this one!
Posted by Sarah at SmallWorld at 10:51 AM No comments: