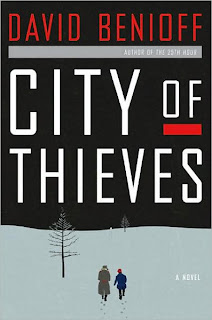 Lots and lots of people have told me that I need to read David Benioff's City of Thieves, and they were right. The novel is based on the author's grandfather's stories of surviving WWII in Russia. It's a stark, frightening picture of survival, but there was something terribly heartwarming about the novel.

It's during the Seige in Leningrad. People are starving, doing anything to survive. Seventeen-year-old Lev Beniov is caught trying to steal from a German paratrooper's dead body. Rather than being executed, he and another young prisoner are charged with what seems to be an impossible task: they must find a dozen eggs for the colonel's daughter's wedding cake. Lev is a shy, articulate son of a famous Russian poet; his unlikely partner is the boisterous, reckless Kolya, an army deserter.

The two take off across the city and through the countryside in search of eggs. People are starving everywhere. Lev and Kolya take incredible risks, but both are so certain that they are going to die, it doesn't seem to matter. The are completely mismatched. Where Lev lacks confidence, Kolya is bold. Where Kolya is rash, Lev is cautious and thoughtful. I liked both of them tremendously.

The story is incredibly heartbreaking but still uplifting. It's a coming of age story for Lev, a war story, and a romance all tied into one tight, beautifully written novel. Highly recommended.
Posted by Sarah at SmallWorld at 4:08 PM 3 comments:

"Now I think that the vast majority of us 'normal' people spend our lives trashing our treasures and treasuring our trash. We bustle around trying to create the impression that we are hip, imperturbable, omniscient, in perfect control, when in fact we are awkward and scared and bewildered. … Living with Adam, loving Adam, has taught me a lot about the truth. He has taught me to look at things in themselves, not at the value a brutal and often senseless world assigns to them." 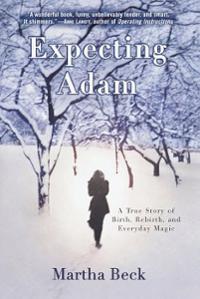 In the memoir Expecting Adam, Martha Beck and her husband John are a young couple caught up in the crazy haze of graduate school at Harvard and new parenthood. Harvard looms like an overbearing, impossible-to-please parent in every corner of their world; the pressure to succeed at Harvard eclipses everything else in their lives. Their world consists of tag-team parenting, little sleep, constant rushing, and determination to stay on top.

And then Martha discovers that she is pregnant again, just as they were starting to figure out how to balance Katie, their toddler, with Harvard and John's new consulting job in Singapore. Martha writes that "motherhood had made me the odd person out among my classmates; they were polite and kind to me but understandably less than fascinated by the details of my life as a nursing mother. I would show up at class after a night in the emergency room, where Katie had been put through a battery of hideously painful tests to determine the cause of some raging illness, and pretend that I really cared abut the contrast between Karl Marx's view of historical necessity and Max Weber's."

Martha is violently ill during pregnancy, barely able to function. A couple of women she barely knew show up at her door, bearing food and emotional support, and she makes actual true friends for the first time in her adult life. Every day is  a struggle for Martha and for John during the weeks that he is at Harvard, but they manage—barely.

Martha was violently ill during her first pregnancy, too, but this one is different. She has all kinds of dreams and intuits that something is not right with this pregnancy, and yet rather than panicking, she feels oddly comforted. She finds out much, much later, even years later, that John had similar experiences.

And then they find out the life-changing news: the unborn baby, a boy, has Down Syndrome. They are shocked beyond words. This is Harvard, the land of geniuses and IQs off the charts. There is no room in Harvard for anything "less" than "perfect." Terminate now, they are told over and over again. John's Harvard mentor, some kind of demi-god, tells John that his career is over if they have this baby.

John and Martha, though both raised in Mormon homes, aren't religious. Both are staunchly pro-choice. But the idea of aborting their baby is abhorrent to Martha and ultimately to John. They have no idea what they will do with a baby with Down Syndrome, but Martha's skills as a researcher kick in, and she finds out everything she can (which, at the time, wasn't much).

From the moment they find out they are expecting Adam, everything changes for Martha and John and Katie. They go from living a life of outrageously high expectations to a life of quiet expectation and joy.

"I really thought there would be a miracle," said John softly… "I really thought God would fix him."
I considered that for a minute. "Maybe he didn't need fixing," I said. "Maybe he's the only one of us who was never broken."
John looked at me. "Are you broken, sweetheart?"
"I was," I said. "Not anymore."
"Same here," said John. He paused, then gave me a smile—not his manic Harvard grin but a real smile, one that contained all the sorrow of the past months, along with the joy. "So," he said, "there's your miracle."


By the time Adam is born, John and Martha are changed people. They are ready to escape the Harvard life and embrace a calmer life focused on nurturing relationships.  As Martha says, "I have had to unlearn virtually everything Harvard taught me about what is precious and what is garbage. I have discovered that many of the things I thought were priceless are as cheap as costume jewelry, and much of what I labeled worthless was, all the time, filled with the kidn of beauty that directly nourishes my soul."

Highly recommended. Martha's writing is fantastic and the story is one you can hardly put down.


Linked up with Semicolon's Saturday Review of Books
Posted by Sarah at SmallWorld at 9:05 AM 3 comments:

Email ThisBlogThis!Share to TwitterShare to FacebookShare to Pinterest
Labels: 2013, memoir

Oh my goodness. Having a head cold is kinda miserable but kinda awesome—awesome because I was too miserable to do anything but lie in bed and read for two whole days. I read three novels. I'm thinking about maybe faking a cold each month.

The Story of Beautiful Girl by Rachel Simon: I can hardly even say how much I loved this. The story is about Lynnie, a beautiful inmate at the School for the Incurable and Feebleminded; Homan, a deaf man who is also locked away there; and Martha, a widow in her 70s who becomes tangled in their lives.

Lynnie and Homan are madly in love and have managed to escape the institution—but only for long enough for Lynnie to give birth to a baby girl. They seek refuge briefly with Martha, and Lynnie begs her to hide the baby. Martha does—for decades.

The rest of the novel spans 40 years or more, reflecting on Lynnie's and Homan's childhoods and reasons for being at the institution; detailing their terrible lives within the facility; following Martha and Julia's life together; and unfolding how their lives, forever intertwined, ultimately are restored.

I absolutely loved this novel. Simon is a compassionate but not overly sentimental writer. All the characters were richly drawn and practically palpable. She has obviously done tons of research on this history of mental institutions and institutional reform. I have put her memoir Riding the Bus with My Sister, her journey of riding a bus with her intellectually disabled sister, on my TBR list. Highly recommended!
Posted by Sarah at SmallWorld at 8:53 AM 4 comments: