Book Review: Everything I Never Told You 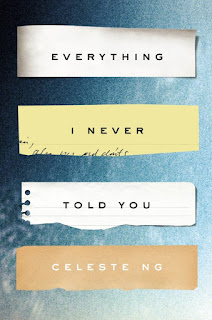 Finally, at the end of the year, I've hit upon a good streak of books. Last week was Anton diScalfani's The Yonahlossee Riding Camp for Girls, and this week it's Celeste Ng's Everything I Never Told You. First of all, this book is scary if you are a parent of  teens. It reminds me just a tiny bit of Anne Lamott's Imperfect Birds in that "what do we not know about our kids" feeling. It's disconcerting, to say the least.

This novel, set in the 1970s, is the story of the Lee family, and, the opening line puts us right there: "Lydia is dead." The Lees are an interracial couple long before it was generally acceptable to be so in the midwest: James is Chinese-American and Marilyn is white. Lydia is their middle child, and clearly their favorite. She's the one they pin all their hopes and dreams on. For Marilyn, Lydia will stand out. She will be the doctor that Marilyn never became—a woman of intelligence and power. For James, Lydia will be the quintessential American teen. She'll be the most popular girl in school. She'll have more friends and boyfriends than she could ever hope for.

But Lydia's just a 16-year-old girl who wants to please her parents, and so she fakes it all. No one knows who Lydia really is, including Lydia. The novel is a journey of discovery in a family that was precariously balanced before Lydia's death and possibly redemptive after her death. It's beautifully written but alarming at times. So many secrets— not huge ones, but the little ones that add up to that eerie feeling of "do I really even know you?"

Highly recommended.
Posted by Sarah at SmallWorld at 12:06 PM 1 comment: