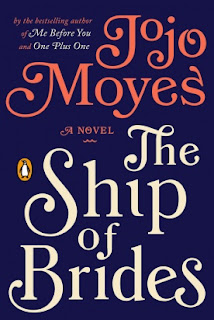 The Ship of Brides by JoJo Moyes (2014)
The story: This novel is based on the true story of 650 Australian war brides who crossed the sea in an aircraft carrier from Australia to Great Britain to be reunited with their mostly British husbands in 1946. (The author's grandmother was one of the brides.) The book focuses mainly on four of the brides, as well as on the captain and a Marine. The novel is framed by the present as an old woman sees a ship and flashes back to her sea journey. This frame scene was extremely confusing, as were the first several chapters before the ship departs, jumping from character to character as she (or he) prepares to leave. The story eventually all came together when the ship departs, and from that point on, I thoroughly enjoyed the novel.
Me: Once I got past the initial confusion and jumping around, I became really engrossed by the book and all the characters. I love novels based on true historical events, especially unknown bits of history like this. I asked my Dad, a WW2 vet and an avid historian, if he knew anything about these war brides, and he had never heard of this. Kudos to Moyes to telling the story for these women and their descendants. 650 women who left their continent for another world: that's quite a story to tell! It wasn't a perfect novel; some of the story lines felt disconnected and extraneous. Still, it was quite interesting and unusual. Recommended. 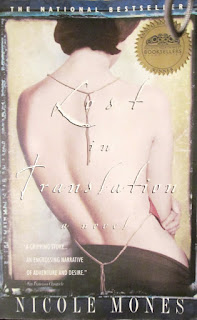 Lost in Translation by Nicole Mones (1999)
The story: Alice is an expatriate living in China. She's a translator who likes Chinese men— a lot. A lot of Chinese men. She's fleeing a childhood with a famous politician father who was also a racist. When she was in her mid 20s, her father forbade her to marry a Chinese man, and she's been drifting from man to man ever since. Enter Adam Spencer, an American archeologist who hopes to find the famed Peking Man and needs Alice to translate for him. From there, the story goes to the search for Peking Man, Alice's search for her own identity, and Alice's love story with Dr. Lin, another archeologist.
Me: I had an extremely difficult time immersing myself in this novel at first, but I think that more likely because I kept putting it down to read other books that had quick due dates at the library. Mones is an excellent writer, first of all. Her prose is captivating and requires slow reading (unlike, for example, JoJo Moyes). This is not a "plot read": this is a book with many complex layers, reflective of the Chinese culture that permeates the novel. Alice herself is an extremely complex character, a brilliant woman driven by demons and a constant search for wholeness. I ultimately became engrossed in the novel and fascinated by the complexities of this dual cultural life of Alice, who so desperately wants to be a true Chinese. I recommend this novel, but it is much more than a beach read. Be prepared to concentrate. 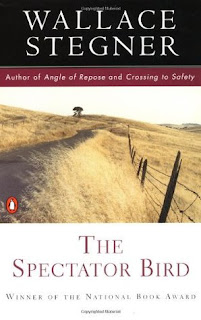 The Spectator Bird by Wallace Stegner (1976)
The story: Joe is a retired literary agent, who does the proverbial puttering around the house. His wife, Ruth, is fairly disgusted with him. He seems to just be done with life. A postcard from an old friend prompts him to find a set of journals he kept during a particularly difficult time in his life: right after the death of their only son. Although Joe is a historically uncommunicative person, Ruth begs his to read the journals aloud to him. Through the journals, they are able to see each other and, perhaps more importantly, Joe is able to see himself as something other than a passive spectator of his own life.
Me: Wallace Stegner is, well, one of the best American novelists. I mean, I'm kind of sheepish to even be writing a review of one of his novels on a silly little blog. One feels the presence of greatness between the pages of such a book.  As I was reading this short novel, I was struck by the careful construction of each and every sentence, by the obvious love of language and the ability to manipulate it in such a fluid and powerful way. There are writers who are purely storytellers, and there are writers who are artists as well. Stegner is falls into the latter category, of course. The plot is really almost insignificant in such a novel. Joe and Ruth— how intimately we know them after reading this. They become living, breathing people, rather than the flat, silly characters of so many other entertaining yet fluffy books written today. They are the people next door, your parents' friends, the couple who you see at the grocery store every week. You realize that in another 20 years or so, you'll be Joe and Ruth, with your own journals to read and stories to reconfigure. Highly recommended. Savor it, and appreciate Stegner's incredible gift. 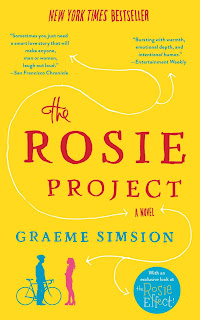 The Rosie Project by Graeme Simsion (2012)
The story: Don Tillman wants a wife. He's a brilliant, handsome genetics professor who also, unbeknownst to himself, displays all the characteristics of Asperger's Syndrome. He has little patience for social customs and has failed miserably at any conventional attempts at dating, so  he devises the Wife Project: a 16-page questionnaire/application that will eliminate all but the perfect wife. She can't smoke, drink much, dye her hair, wear lipstick, etc. And then he accidentally meets Rosie, who is a perfectly unqualified candidate, so he thinks.
Me: I loved everything about this novel. I laughed out loud many times and read the whole darn thing through in one afternoon, in spite of having a dozen other things I should have been doing. I happened to have recently spent time with a friend who could be Don in real life, so I was especially attuned to the quirks, patterns, and absolute lovableness of a guy like Don. (It's never explicitly stated that Don has Asperger's, nor is my friend officially diagnosed.) Anyway, this is just a funny, sweet, smart, and happy story. I wanted it to be twice as long as it was, but, fortunately, there is a second Rosie novel which I hope to find soon. Highly recommended! 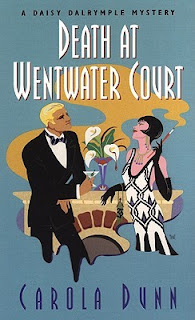 Death at Wentwater Court by Carola Dunn (1994)
The story: While visiting Wentwater Court and writing an article about this noble family of England, Daisy Dalrymple stumbles into a murder investigation. The story takes place in the 1920s, and there is a predictable cast of characters doing and saying predictable things. The detective interviews the whole family, etc. etc.
Me: It was a simple mystery. There was nothing surprising, particularly satisfying, memorable, or even terribly interesting. I read it because it is our August book for book club. I don't really have anything to say about it other than I have no idea what we can possibly discuss at our next meeting. Man dies, someone did it, and who did it isn't much of a mystery. I guess if you like simple, cozy, sleepy British mysteries, then perhaps you will enjoy this? 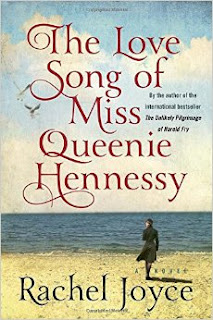 The Love Song of Miss Queenie Hennessy by Rachel Joyce.
The story:  First, you must read The Unlikely Pilgrimage of Harold Fry for this novel to make sense. But that's good news, because Harold Fry is absolutely fabulous. If you've already read Harold Fry, then very quickly run and get this book. This is the story of Queenie, who waits in hospice for Harold Fry to walk across England to reach her before she dies. In Harold Fry, we journey with him as he makes his physical and emotional pilgrimage. In this novel, though, we hear Queenie's side of the story. And what a tragic yet beautiful story it is.
Me: "If only memory were a library with everything stored where it should be. If only you could walk to the desk and say to the assistant, I'd like to return the painful memories about David Fry or indeed his mother and take out some happier ones please." Rachel Joyce is simply an incredibly storyteller. I thought Harold Fry was pretty much a perfect novel, but The Love Song is possibly even better. And the two together? Power couple. I read it all in one day. Told from the perspective of Queenie, who is on her deathbed, the novel was bittersweet and so beautiful written. She pulls back layer after layer of memory to reveal the story of her love affair with Harold Fry and, in a sense, with his son David. These two novels together will no doubt be if not by favorite of the year, then certainly in the top 5.