The Sunday Salon: October in Review

Best Book of the Month
The Kitchen House. Oh my goodness! Loved it!

Top 3 Most Visited Reviews This Month on SmallWorld Reads
Frankenstein
The Great Gilly Hopkins
Snowflower and the Secret Fan
Posted by Sarah at SmallWorld at 7:00 AM 2 comments:

Book Review: One Second After

One Second After by William Forstchen is our November book club choice. This is not a book I would normally pick out to read, and that's just one of the many things I love about book club.

This novel is set in Black Mountain, NC, not too far from where I live. The main character is a history professor and retired military man with two daughters. One afternoon they notice a strange silence and discover that the cars on the interstate aren't moving. Eventually they discover that absolutely no electrical devices are working. The professor soon figures out that a nuclear bomb contained an electromagnetic pulse that destroyed anything electrical. I wasn't terribly interested in all that, but I'm sure some readers would find that discussion fascinating.

The rest of the novel focuses on how a town survives when it's thrust back hundreds of years. I really appreciated how Forstchen tackled the town bit by bit: what happens in the nursing homes, to people who rely on medicines, to the mentally unstable. How parents starve themselves so their children can have a bit of food. How inevitably, bands of terrorists form and roam the countryside, killing for food.

The writing itself was aggravating but I managed to get through it as a plot read. Way too much dreadfully forced, cheesy dialogue. Stiff action. Bad editing. But again, it was a great plot read. It doesn't hold a candle to Stephen King's The Stand or Cormac McCarthy's The Road, but it was interesting.

Linked up with Semicolon's Saturday Review of Books
Posted by Sarah at SmallWorld at 8:32 AM No comments:

Email ThisBlogThis!Share to TwitterShare to FacebookShare to Pinterest
Labels: 2011, post-apocalyptic

Oh my goodness. Have you read Kathleen Grissom's The Kitchen House? If not, go quickly and buy it, borrow it, or take it off your TBR pile. I wish I had another book guaranteed this good to anticipate!

The Kitchen House is the story of Lavinia, a little Irish immigrant orphan who becomes an indentured servant on a Virginia plantation, and the family that raises her—and the family that owns her. What Lavinia doesn't understand is that she is white and her adopted family is the property of the master: the slaves of the big house.

As she grows into womanhood, she is forced to acknowledge that she is a white girl, and her family is black. What she refuses to deny, however, is that they are, indeed, her family. She has to learn to carefully straddle the two worlds, to protect those she loves, and to simply survive a brutal introduction into adulthood.

I know. It sounds like a "been there, done that" kind of novel. The plot line I've given merely scratches the surface. There is nothing sentimental or trite about this novel. Grissom is a master storyteller. Told from the perspectives of both Lavinia as well as Belle, her adoptive mother who is the master's illegitimate daughter, the novel is fast-paced, beautifully written, and absolutely compelling.

In an interview, author Grissom hints that she may be writing more on some of the characters in this novel. I can only hope!

Linked up on Semicolon's Saturday Review of Books
Posted by Sarah at SmallWorld at 9:39 AM 8 comments:

Email ThisBlogThis!Share to TwitterShare to FacebookShare to Pinterest
Labels: 2011, Favorites

The Sunday Salon: September in Review

Books Read in September (click for my reviews)
Nickel and Dimed: On (Not) Getting By in America by Barbara Ehrenreich
Song of the Lark by Willa Cather

(Pretty sure that is an all time low for my monthly reading. Yikes!!)

Special Event
I got to hear Amy Greene, author of the fabulous Bloodroot, read at our local college! She was so wonderful and inspiring. I can hardly wait for her next book! 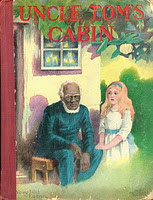 Currently Reading
One Second After by William Forstchen

Book Review: Song of the Lark

My son, now in his sophomore year in college, switched his major to English literature in the middle of his freshman year. I never imagined the burst of joy I would feel when I heard those beautiful words, "I think I'm going to change my major." It isn't that I didn't approve of his former major (entertainment industry), it's just that he is the quintessential English major.

All that to say: when I quizzed him on his favorite book all year, he named Willa Cather's Song of the Lark without hesitation. I am proud to say that I introduced my son to Willa Cather with My Antonia, which I actually didn't read until a few years ago. Oh my goodness. How I adored that book! I have no idea how Willa Cather escaped me all of my years as an English major.

But I had never even heard of Song of the Lark until my son had to read it for a class. I grabbed it from his bookshelf a few weeks ago when I discovered I had nothing to read. Notice I said "a few weeks ago." I was in one of those fall-asleep-after-3-pages kind of months. But that has no reflection on the book.

I loved it. This is the story of a little immigrant girl with a very big voice in a tiny town in Colorado. Everyone in Moonstone knows that Thea is different. It is no surprise when an inheritance from an admirer allows her to go to Chicago to study music. Ultimately she becomes a great opera singer, but not without tremendous sacrifice. This is the portrait of the artist as a young woman and more: the classic struggle of the artist with herself, with society, with the people who love her.

Cather's prose is phenomenal. This is one of those books in which I wanted to keep underlining passages and turning down page corners. Such moments of profundity! Such perfectly poetic descriptions! I am quite sure that Cather is severely neglected in the study of American literature. I don't understand why she is left out of the traditional canon. In my experience students respond enthusiastically to My Antonia, and I suspect Song of the Lark—with its themes of coming of age, search for identity, and struggle of the artist— would also widely appeal to students.

And adults, of course. I loved this novel, not as much as My Antonia, but tremendously. I noticed that there is a PBS movie of Song of the Lark. Sadly, neither Netflix nor our local public library carries it.
Posted by Sarah at SmallWorld at 8:37 AM 5 comments: