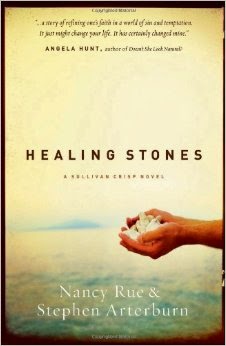 This novel by Nancy Rue and Stephen Arterburn was this month's book club choice. Billed as the first in a series that feature the psychologist Sullivan Crisp, Healing Stones deals with how a family reacts and recovers after adultery.

Demitria Costanas, a professor at a Christian college, is caught in an affair with a colleague. She is fired from her job, her husband and kids reject her, the guy disappears, and basically her whole life falls apart. She moves out on her own and begins to make a little progress, only to have something else happen that sets her back. Eventually she seeks the counsel of Sullivan Crisp, who has a unique "game show" method of counseling.

So… I'm not a big fan of what's billed as Christian fiction. With a few exceptions (Francine Rivers, Jamie Langston Turner), it's often not particularly well written, sentimental, and dogmatic. This novel was not at all dogmatic, but it all just seemed so contrived. There wasn't anything particularly terrible about it. Many of the women in my book club absolutely loved it. I think if you like Christian fiction in general, this is probably a great series.
Posted by Sarah at SmallWorld at 8:32 AM No comments: