Book Review: The Devil Amongst the Lawyers 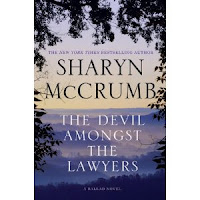 I am a big, big fan of Sharyn McCrumb's ballad novels, which take place in the hills in Upper East TN and southwest Virginia. She Walks These Hills, my introduction to McCrumb novels, is absolutely magical. I love it and so many of the other books, which all have a current mystery set against a historic event. Southern legends, mountain stories, etc. Great books.

But this one. Oh dear. I can truly say that Devil Amongst the Lawyers is dreadful. If this had been my first Sharyn McCrumb book, I would never pick up another one. It's kind of like a handbook on what writers should not do: jump around; include a dozen flat, main characters; use every possible stereotype to describe your characters; make your dialogue stilted; throw in bits of information that you know about topics unrelated to the story; have the story itself be an abysmal mess; and make your reader want to actually rip the book apart.

Here is what I have to say. Please do not read this book. Ever. Instead, please read McCrumb's other fantastic ballad novels: She Walks These Hills, If Ever I Return, Pretty Peggy-O, The Hangman's Beautiful Daughter, The Rosewood Casket, The Ballad of Frankie Silver, The Songcatcher, and Ghostriders.

I was eagerly looking forward to Sandra Dallas's newest release, Whiter Than Snow. Like Prayers for Sale, Whiter Than Snow takes place in a small mining community in Colorado. At the beginning of the book, there is an avalanche, and we know that several children are trapped in it on their way home from school.

The novel then tells the background stories of various key players in the town, focusing especially on all the families of the trapped children. I'm embarrassed to say that it took me a few chapters to realize this. I read the first vignette and then wondered, midway through the next section, what had happened to those couples in the first chapter. (Sometimes it does pay to read the back of the book.) I enjoyed each character snapshot immensely once I figured out what was going on.

Ultimately, Dallas brings us back to the tragedy. She reveals in the first chapter that two of the children die, and we find out which ones—and how their families cope—at the end. The story was beautifully told, particularly in this last section when the townspeople cross all social lines and let go of past grievances to help each other. Sounds trite, I know—a story that's been told thousands of times in different ways. But still, it's a story that resonates and gives the reader that sense of the goodness in humanity. And we all need stories like that.

This isn't my favorite Dallas book by far; Tallgrass still holds that spot. But it's a quick, enjoyable read with some really good spots.

Other Reviews of Whiter Than Snow
Booking Mama
CaribousMom
Life in the Thumb
Lesa's Book Critiques
Posted by Sarah at SmallWorld at 9:08 AM 3 comments:

The Sunday Salon: August in Review

Favorite Book of the Month
This was a superb reading month. Truly filled with excellent, enjoyable, thought-provoking books that I highly recommend. But The Spirit Catches You and You Fall Down by Anne Fadiman takes the prize for the best book of the month.


Currently Reading
Sharyn McCrumb's newest, The Devil Amongst the Lawyers: A Ballad Novel


To Be Read in September
Like Water for Chocolate by Laura Esquivel
Breath, Eyes, Memory by Edwidge Danticat
Blue Like Jazz by Donald Miller
Confederates in the Attic
The Land Remembers


Reading to the Kids
The Lion, the Witch, and the Wardrobe by C.S. Lewis (multiple re-read)
Posted by Sarah at SmallWorld at 7:53 AM 3 comments:

Never Let Me Go is my introduction to Kazuo Ishiguro, and I have to say it was a fantastic introduction. I had no expectations and really had no idea what the book was about based on the jacket summary. And I'm not really going to tell you what it's about because the book relies heavily on the element of mystery.

The mystery is in the private boarding school, Hailsham, and its students. It all starts off in a familiar way: the narrator, Kathy, is reminiscing about her years in Hailsham, focusing in on a particular bullying incident and a special friendship. But the reader quickly understands that this is not an ordinary boarding school.

You know what? That's all I'm going to say. I like to be surprised by books. Ishiguro's prose is really perfect, so if you already know more about this book than I did, you'll love it just for his writing. But if you don't know, don't read any more reviews. Just go read the book. And after you read the book, you can look forward to the movie coming out soon. The trailer is here, but there are spoilers.

Other Reviews (without spoilers)
Semicolon
Shane Richmond
Blue Archipelago
S. Krishna's Books
Posted by Sarah at SmallWorld at 7:58 AM 6 comments: