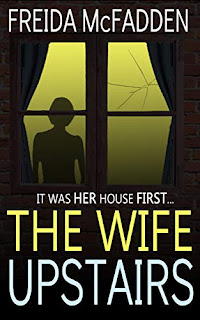 The Wife Upstairs by Freida McFadden

The story: Sylvia needs a job, and Adam has one. Adam watched her give the Heimlich maneuver to a choking restaurant patron, and he thinks she can handle his wife, Victoria, who has been in a serious accident. Victoria, once a strong, capable professional, can't walk or speak, and Adam, a novelist, just needs someone to keep her company in their big house out in the middle of nowhere. But Victoria clearly has something to say, if only she can make Sylvia understand. And then Victoria somehow communicates to Sylvia that she has a hidden diary that will tell ALL. Sylvia, however, has fallen for Adam, and just can't believe that Victoria's diary is for real. Who to believe?

My reaction: Oops! I bought this book for my daughter for Christmas, thinking it was, well, The Wife Upstairs, which it was. Except I really meant to get her The Wife Upstairs by Rachel Hawkins, which I read last month. Silly me! I had the title in my head but not the author, so here we are. I was totally sucked into this book, all the while thinking, "This is SO dumb." If you haven't read Gillian Flynn's Gone Girl, go read that instead. It's the same basic story, sorta, but infinitely better written and engrossing. My recommendation: skip this unless you need a very cheap thrill. 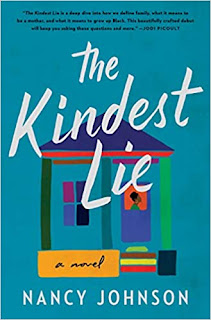 The Kindest Lie by Nancy Johnson

The story: The story opens on a wonderful night: Barack Obama has just won the presidency. Ruth and Xavier, a Black couple, are elated, and Xavier feels this is the right time to start a family. But Ruth has a very big secret. As a teenager, she gave up her baby for adoption. She didn't have a choice in the matter; her grandmother insisted that Ruth give them baby up and took care of all the arrangements. No one except her grandmother and brother even knew she'd been pregnant. Ruth then went to Yale, became an engineer, married Xavier, and put her past behind her. But before she begins a family, she needs to know more about her son... and she really needs to tell her husband about him. She heads back to her small town in Indiana and searches for clues. While she's there, she puts together pieces of her past and meets a little white boy named Midnight who desperately wants a family... and ultimately leads Ruth to her son.

My reaction: I loved this book. The title is perfect, as I questioned, as Ruth did, the nature of lies. Were the lies in the book kind or selfish? Hurtful or beneficial? Is there a right time for telling the truth? This is a multilayered book, incorporating themes of racism, adoption, class, family, and the ripple effect of decisions and lies. I heard an interview on Fresh Air with Nicole Lynn Lewis, whose memoir Pregnant Girl: A Story of Teen Motherhood, College, and Creating a Better Future for Young Families would be a compelling partner to this novel. How might Ruth's life—as well as so many other characters' lives— had been different had she kept her son? Johnson's debut novel is highly recommended! It is well written, engaging, and thought-provoking. 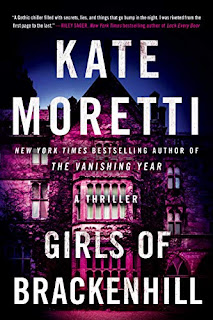 The Girls of Brackenhill by Kate Moretti

The story: When Hannah's Aunt Fae dies in a car accident, she and her fiancé return to Brackenhill, where Hannah spent her summers as a child and teenager. Hannah hasn't told Huck much about her past (seems to be a theme in this month's reading!), so he is shocked to find that Brackenhill is actually a castle. As soon as Hannah steps into the castle, she is reminded of just how much she loved this place as a child. It was her comfort, her happy place. Her own life back with her mother and stepfather was terrible and terrifying, but here in Brackenhill, she had been carefree and cared for. Aunt Fae and Uncle Stuart truly loved her and her sister, Julia. But on that last summer, Julia disappears. There's no body, no sign of foul play —she's just gone. Hannah has been convinced all these years that Julia ran away, and now she is determined to figure out what really happened.

My reaction: I was both wrapped up in this book and annoyed with it. I think it could have used one more revision, honestly, to knock out some of the repetition and sharpen the focus. As so often happens, this novel was intriguing for a good two-thirds of the way through, and then the ending just fell apart.  It's the kind of novel you finish and think, "Huh? Did I like this?" For one thing, Brackenhill Castle itself is confusing. Hannah has wonderful, warm feelings about the castle, but it's frankly portrayed as an evil character. Moretti sets up an atmosphere of haunting, complete with a sinister basement. (DON'T EVER GO IN THE BASEMENT!) And yet Hannah loves this place. It was confusing. Is she comforted or terrified? Is the castle good or evil? Or is the answer supposed to be just, "yes!" There were a lot of extra characters in the novel who just seemed a distraction, and we're never really sure what happened in the end. I give it a three out of five stars for a middle-of-the-road read. 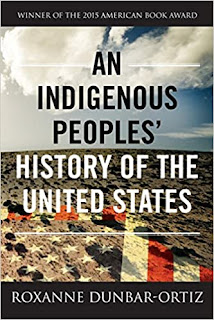 Indigenous Peoples' History of the United States by Roxanne Dunbar-Ortiz

The story: The title pretty much says it all. This is the historical perspective that never gets told. The one that is ignored, pushed aside, and buried. As Dunbar-Ortiz writes:

US history, as well as inherited Indigenous trauma, cannot be understood without dealing with the genocide that the United States committed against Indigenous peoples.

This book tackles just that: the U.S. crimes against Indigenous peoples. Dr. Martin Luther King, Jr, is quoted at the beginning of one chapter as saying:

Our nation was born in genocide.… We are perhaps the only nation which tried as a matter of national policy to wipe out its indigenous population. Moreover, we elevated that tragic experience into a noble crusade. Indeed, even today we have not permitted ourselves to reject or feel remorse for this shameful episode.

My reaction: I wrote back in January that Isabel Wilkerson's Caste is a book every American should read, and I will make that plea again for this one. We should also be talking about this and teaching this to our children and in our schools. It's a hard truth, an ugly truth — but we have to acknowledge that the U.S. was created by people with no regard for lives other than white European ones. I read this as part of a special book discussion group, hosted by a friend whose life as been deeply affected by her family's Cherokee roots. As part of our group, she read to us from her memoir-in-progress. The particular passages she read included visits to see her grandmother in Cherokee, NC, on the reservation and in the town itself. It was a wonderful companion to the book — her one small story of how poverty and loss of land affected just one family. Her story is told by thousands of Indigenous people through the generations.

Like Caste, the book ends with a call to action and a challenge:

That process rightfully starts by honoring the treaties the United States made with Indigenous nations, by restoring all sacred sites, starting with the Black Hills and including most federally held parks and land and all stolen sacred items and body parts, and by payment of sufficient reparations for the reconstruction and expansion of Native nations. In the process, the continent will be radically reconfigured, physically and psychologically. For the future to be realized, it will require extensive educational programs and the full support and active participation of the descendants of settlers, enslaved Africans, and colonized Mexicans, as well as immigrant populations.

My other most recent reviews are on my Books Read in March post.

Linked up with Top Ten Tuesday at the Artsy Reader Girl.