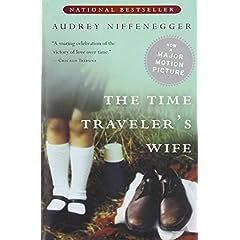 It is hard to imagine that this is Audrey Niffenegger's first novel. This book is incredibly well written. I have been putting it off for a while because the plot sounded complex and too close to sci-fi (not my favorite genre). Instead, this is the story of Henry, a librarian, and Clare, his artist wife. Henry suffers from the not-yet-named Chrono-Displacement Order, which transports him from the present to another point of time (usually the past) without warning. One minute he may be with his wife in 2003, the next minute he may find himself spying on himself and his parents when he was a child. Sounds confusing, and I admit to being a little slow to warm up to the concept. I thought I'd be constantly confused by the time; however, the author clearly states the date, place, and age of Henry and Clare with each segment. I loved the book. Warning: some rather explicit scenes within.
Posted by Sarah at SmallWorld at 11:27 AM 1 comment:

The Pact is my first Jodi Picoult book, and I have to say I could hardly put it down. It was one of those books that you think, "I really should not be reading this highly disturbing book," and yet....I had to. I even read during the daytime when I should have been being a productive member of this household, which I never, ever do. I like books in which the characters are easily accessible, even if they are somewhat formulaic (the cold, hard MD married to the kind and laid back mom vs. the laid-back veterinarian married to the cold and distant mom). The story itself is pure tragedy: one teenager dead, and her boyfriend left holding the gun--supposedly a botched double suicide. The novel itself is the story of their lifetime together and the year that follows her death. Disturbing, well-written, fast read.

Posted by Sarah at SmallWorld at 11:26 AM No comments:

Book Review: Talk to the Hand

We are an anxious people, explains author Lynn Truss, in part because we have lost our guidelines for acceptable manners. Proper protocol has eroded in the past couple of generations to the point where we don’t even know for sure if we are being rude. As Truss says in this book, “We live in a ‘talk to the hand’ world. Yes, we are systematically alienated and have no sense of community. … But just because there are the conditions that promote rudeness does not mean that we can’t choose to improve our happiness by deciding to be polite to one another. Just as enough people going around correcting apostrophes may ultimately lead to some restoration of respect for the English language [Truss is also the author of the best-selling grammar critique Eats, Shoots and Leaves], so enough people demonstrating kindness and good manners may ultimately have an impact on social morality.”

The first part of this book, which is subtitled "The Utter Bloody Rudeness of the World Today, or Six Good Reasons to Stay Home and Bolt the Door," I found hilarious. I was laughing so hard that Dr. H. suggested I go to bed, as I was interrupting his football game. The rest of the book I found strangely reassuring: I’m not the only one who finds the lack of manners in today’s world appalling. And yet I can understand why there is mass confusion concerning manners: no one knows what we’re supposed to do or say because moral absolutism has become fuzzy in society. As Truss says, “The problem is that it has become politically awkward to draw attention to absolutes of bad and good. In place of manners, we now have doctrines of political correctness, against which one offends at one’s peril: by means of a considerable circular logic, such offences [sic, she’s British] mark you as reactionary and therefore a bad person. Therefore if you say people are bad, you are bad.”

It is difficult as a parent to teach your children good manners when they are constant witnesses to rotten behavior. And of course, the definition of “bad manners” has a funny way of changing year-by-year. We have to rely on our guts to guide us through social situations. The modern-day Christian equivalent to this might be the mantra “WWJD?” Says Truss, “The crying shame about modern rudeness is that it’s such a terrible missed opportunity for a different kind of manners—manners based, for the first time, not on class and snobbery, but on a kind of voluntary charity that dignifies both the giver and the receiver by being a system of mutual, civil respect.” (Hmm, sounds to me like, “Love your neighbor as yourself…”)

Great book. I’m very glad I don’t live in Britain, as her descriptions of the British (and she is British) are terribly, well, rude. I leave this book feeling more determined than ever to instill a concrete foundation of good manners in my children.
Posted by Sarah at SmallWorld at 10:47 PM No comments:

Yes, I've finally read it! People have been telling me to read this account of the 1996 Mt. Everest disaster for years, and they were right: this is a fantastic adventure book. I became a complete fan of Jon Krakauer's writing in Under the Banner of Heaven, and Into Thin Air did not disappoint. My boys have long been Everest junkies (although they don't wish to climb Everest, fortunately!), and I am sorry I didn't sit with them and watch the Discovery Channel's recent "Everest" series. Although adventure books aren't in my usual repertoire, I will definitely be looking out for more (and am adding Krakauer's Into the Wild to my 2007 reading list).

Posted by Sarah at SmallWorld at 10:42 PM No comments:

Robert Morgan is a master storyteller. His writing is poetic and his stories fascinating, especially for those of us living in the mountain country from which his tales are spun. This book tells the stories of three generations of a mountain family, starting with Petal in 1772 and ending with her great-grandson in the 1840s. While the second and third stories were interesting, it was Petal's story that most intrigued me. I would have loved to have read the whole novel about her. The second and third stories involve the process of building roads through the mountains, and anyone who has seen the mountains bleed red earth for a road to go through knows what a heartbreaking scene this is. An interesting twist, though, is that these stories are narrated by the roadbuilders themselves. I've never been disappointed with Robert Morgan and have at least a few more of his novels yet to read.

Posted by Sarah at SmallWorld at 10:40 PM No comments:

Book Review: In My Mother's House


Hmmm....I like Elizabeth Winthrop's children's books better. She's a great writer, and the story itself was excellent, but I guess "unsettling" is the word that best describes In My Mother's House. This isn't a terribly cheerful book and is, in fact, very disturbing at times. Still, I don't regret reading it. If nothing else, it was an interesting look into one girl's life in the latter part of the 1800s and early 1900s.
Posted by Sarah at SmallWorld at 10:38 PM No comments:


Subtitled "How My Mother Raised 10 Kids on 25 Words or Less," this book by Terry Ryan tells the story of how Evelyn Ryan kept her family from pure poverty by submitting advertising jingles and winning contests back in the 40s and 50s. The father of the family spent the majority of their small income on drinking, while the Mom cheerfully and determinedly kept the family afloat, winning everything from ice crushers to thousand-dollar grand prizes. This was a fascinating look into the bygone world of contests and a family that survived by one woman's great creativity.
Posted by Sarah at SmallWorld at 10:38 PM No comments: