My friend Julie, who ranks high on the coolness factor, said I must read this book ASAP. Amazingly, I had "go to library" on my to-do list for that day, went to the library, and actually found the book on the shelf! It was a very good library day.

Jonathan O'Dell's The Healing is a can't-put-it-down kind of book. The story flashes between old Granny Satterfield and an orphan girl she inherits, and Granny's life as a slave, first as a pet to the grief-stricken, crazed landowner's wife and then as the plantation's reluctant healer.


Old Granny tells the traumatized orphan girl the story of her life in bits and pieces, hoping to bring healing to her through words and connections. Old Granny was torn from her mother's arms as a newborn at the demand of her mistress, whose own daughter had just died. Mistress dresses the girl, whom she names Granada, in her dead daughter's outfits and keeps her by her side. She doesn't love Granada but needs her as some sort of comfort item or plaything. The mistress also insists on keeping a monkey as a pet, and she becomes a laughingstock of the community, with her slave girl dressed in frills and her pet monkey climbing on her shoulders.

The young Granada, however, is convinced that the mistress sees her as a daughter. She is bewildered and horrified when she is yanked from her comfortable life in the big house to become the new healer's apprentice. The master purchases Polly Shine to cure his slaves of a terrible disease, and Polly immediately sees a kindred spirit in Granada. She insist on having her as a helper, and Granada's life becomes a nightmare. She does learn from Polly, in spite of herself, but her obstinate nature causes more than one disaster.

As Granny narrates her stories to the orphan girl, she finds healing in herself and release from the burden of the poor choices she made during her days as Polly Shine's apprentice.

If you liked such novels as The Help and The Kitchen House, you'll love The Healing! Highly recommended. 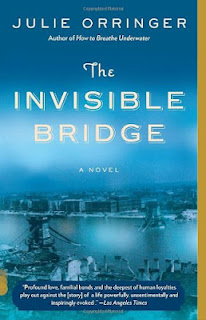 Stunning, sweeping, heartbreaking, uplifting: these are the first words that come to mind as I review Julie Orringer's The Invisible Bridge. This novel is simply brilliant, although there is nothing simple about it.

Based on the author's own family story, The Invisible Bridge begins in 1937 with a young and excited Andras Levi, who is on his way from his home in Budapest to study architecture in Paris. The world is wide open before him. He quickly rises to the top of his class, and he falls in love with an older woman with a mysterious past. The reader gets as wrapped up in Andras and Klara as they are, not realizing the incredible danger that surrounds them. Andras and Klara are Jewish, and the war is about to change their lives forever.

The novel takes Andras from Budapest to Paris, back to Budapest and then to the horrors of labor camps. But I don't want to reveal too much, so let me focus on Orringer as a writer. First, there is the  poetry of her writing, the striking images that I had to read over and over:

"He felt the stirring of a new ache, something like homesickness but located deeper in his mind; it was an ache for the time when his heart had been a simple and satisfied thing, small as the green apples that grew in his father's orchard."

"The hills east of Buda had come into their young leaves, insensate to the dead and the grieving. The flowering lindens and plane trees seemed almost obscene to Andras, inappropriate, like girls in transparent lawn dresses at a funeral."


And I was constantly amazed by Orringer's attention to detail—to following each story through to its end. Orringer's characters are so vivid, so multidimensional, I could swear I really know them. And what a tremendous amount of research the author has done as far as the WWII itself. Unbelievable.


I'm really quite astounded by The Invisible Bridge. The last 50 pages or so I read in a doctor's office while waiting for a friend, and I embarrassingly wept now and then. I was slightly numb when I closed the book, stunned by human resiliency as displayed in the character but also stunned by Orringer's ability to craft such a novel.

Posted by Sarah at SmallWorld at 8:19 AM 5 comments: