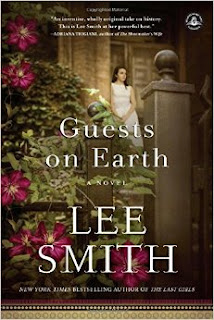 Guests on Earth by Lee Smith.
The story: Age 13 and newly orphaned, Evalina is admitted to Highland Hospital in Asheville, NC, as a mental patient—although she is certainly not mentally ill. Highland becomes her home, nonetheless. Evalina meets a cast of interesting characters during her many years in Highland, including Zelda Fitzgerald. While Zelda makes only brief appearances in the novel, she adds an interesting and realistic touch to it. The novel also provides a glimpse into psychiatric practices—lobotomies, shock treatment, insulin injections— of the early-to-mid 20th century.
Me: I liked this novel, although it's definitely not a stand out for me. It seemed a bit contrived and rambling, but it was a good story—and I always love Zelda appearances. A couple of years ago, I took my American literature class on a field trip to Asheville, and we drove by what used to be the Highland Hospital, so that was a great connection.

Nectar in a Sieve by Kamala Markandaya. This is a multiple re-read for me. I teach this as part of my World literature class. Click on title link for my review. 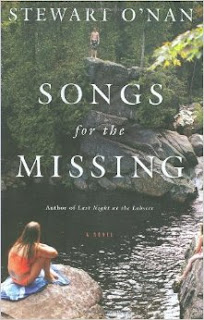 Songs for the Missing by Stewart O'Nan.
The story: One day 18-year-old Kim doesn't show up for work. Kim's a responsible girl, a typical teenager. She has all kinds of secrets from her parents, but she's dependable and definitely not runaway material. Her boyfriend and her best friend are perplexed, and they join her parents and younger sister in a search that is supported by the whole community—for a while. But eventually the leads grow cold, and Kim's friends go off to college and try to make new lives for themselves. Her younger sister becomes "that girl" in her school—the one whose sister is missing. And her parents struggle with finding the balance between living and searching.
Me: I have no idea how I happened to pick up two missing-daughter novels in consecutive months (Tim Johnston's Descent was the other)! These are terrible books to read when one has a teen daughter! But both were well written and fascinating. I liked Johnston's better. Descent was more of a plot read and psychological thriller, whereas O'Nan's was more raw and desolate. That has nothing to do with the writing: both were truly excellent. O'Nan's is missing, well, a happy ending. 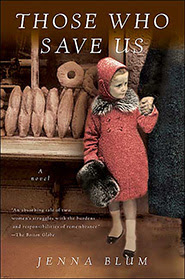 Those Who Save Us by Jenna Blum.
The story: Trudy is a middle-aged history professor who has little sense of familial obligation. Caring for her mother, Anna, is a side duty for her. She visits her on proper holidays and leaves as soon as she can. Their relationship, built on hears of silence, has always been strained. But Anna has a reason for her silence: her past is too painful to disclose. During World War II, Anna was forced to be a Nazi officer's mistress in order to keep herself and, more importantly, little Trudy alive. Adult Trudy knows none of her story, and, in fact, she is disdainful of what she thinks she knows about her mother's life. Anna's story is revealed in alternating chapters, which are much more interesting than the chapters devoted to Trudy.
Me: Anna's story was heartbreaking and mesmerizing. Sometimes it was a bit too graphic, but I tend to be a fairly sensitive reader. I've read dozens of WWII era novels, yet somehow, this presents still another perspective—that of a young German woman who does what she has to in order to survive. I didn't love the chapters with Trudy, but I understand that this was a mechanism to tell her mother's story in flashback. Still, Anna's story is powerful and absolutely worth reading. 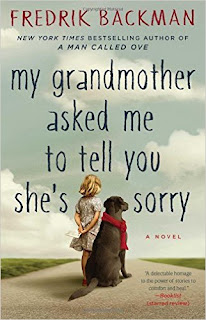 My Grandmother Asked Me to Tell You She's Sorry by Fredrik Backman.
The story: Seven-year-old Elsa is a genius. When her grandmother, who was her best friend, dies, Elsa is left with the task of taking care of various people by delivering letters of apology to them. The people nearly all live in her grandmother's apartment building, and they all were somehow rescued by her grandmother. Ultimately, they all come together to save Elsa—and themselves.
Me: I wanted to like this book. I loved A Man Called Ove. Really loved it. But–I didn't get this one. It could have been because I was traveling to and around Austria during the time I was reading it. It could have been jet lag. But I was glad when the book was over, and I felt confused after reading it. Amazon reviewers say it's fantastic, involving, charming, and funny, but I missed most of that. I was just perplexed and felt like I didn't get the joke. 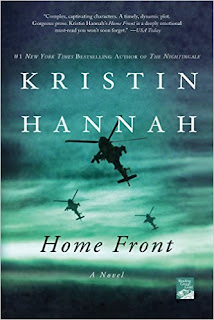 Home Front by Kristen Hannah.
The story: Jolene is an eternally optimistic, upbeat helicopter pilot; her husband, Michael, is a lawyer who is anti-military and disgruntled with their life. Their marriage is falling apart, but Jolene is too optimistic to confront him. One night Michael finally tells her that he doesn't love her anymore, and, before she can figure out what to do with the information, she is deployed. Michael has to step up to the plate and take care of their two young daughters while she's at war. Midway through her deployment, she is injured and comes home as a different person—one that they all have to figure out how to live with.
Me: I loved Hannah's The Nightingale. It will probably be in my Top 10 best books of this year. And so.... I was terribly disappointed in this novel. There was so much about it that just didn't make sense. Why was the husband such a jerk? Why didn't she confront him about being a jerk? Why did he marry her if she was career military and he was anti-military? Why did he keep buying her wine if she had a drinking problem? Why does the little girl always want to play patty-cake? Why was he surprised that he was a "military family"? I just didn't love this book. It was formulaic and felt so contrived. But The Nightingale? Please, read that one!!

Linked up with the Saturday Review of Books and The Sunday Post
Posted by Sarah at SmallWorld at 1:20 PM No comments: