Book Review: The Things They Carried 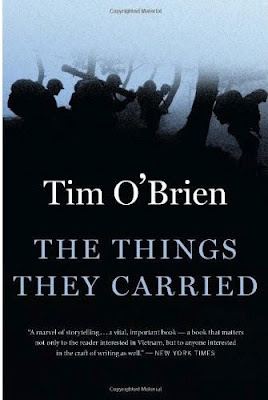 When I was in college, I took an intense class on the Vietnam War. It was taught by a history professor and a psychology professor, who served two tours in Vietnam. I loved this class with every fiber of my being. I cannot even begin to list all the books we read and all the ones I read later about Vietnam.

But that was all before Tim O'Brien's The Things They Carried. It was published just a few years after I graduated from college, but somehow I just wasn't ready to read any more Vietnam War novels for a long time after being immersed in that class. And now my oldest is in college and had to read something by Tim O'Brien for a class. He loved it and picked up a bunch of O'Brien's books at a used book store, including The Things They Carried, which he then declared about the best book he has ever read. (And, like his parents, he is a prolific reader, and, like his mother, an English major.)

And so I finally read it. I was hooked from the very first line, and I was reluctant to put it down each night to sleep. I carried it with me during the day when I wasn't reading it. I carried the language of Tim O'Brien—the absolutely beautiful poetry, the lyrical longing, the heartbreak.

"They carried the land itself—Vietnam, the place, the soil—a powdery orange-red dust that covered their boots and fatigues and faces."

The Things They Carried is a novel—a work of fiction. It's also a memoir—a work of creative nonfiction. And it is for sure a work of poetry. Blended together, the line between truth and fiction (what really happened to Tim O'Brien, the author, and Tim, the soldier) is blurry. The stories he tells may or may not have happened exactly like he tells them, at least to him. But in the collective face of war, they are true to the core.

What words can I use to describe the book? Haunting. Terrifying. Heartbreaking. Beautiful. Brilliant. It's a war story, a love story, a study of lives stopped and started again but never the same. Please, please read it.

"And in the end, of course, a true war story is never about war. It's about sunlight. It's about the special way that dawn spreads out on a river when you know you must cross the river and march into the mountains and do things you are afraid to do. It's about love and memory. It's about sorrow. It's about sisters who never write back and people who never listen."

Posted by Sarah at SmallWorld at 9:18 AM 3 comments:

I had such high hopes for this newest novel by Tatiana de Rosnay, author of Sarah's Key, which I absolutely loved. (My review here.) And while A Secret Kept wasn't nearly up to par with Sarah's Key, I did enjoy it.

The story focuses on Antoine and Melanie, brother and sister in their 40s, who take a birthday vacation to the sea at Noirmoutier Island. As children they spent many happy summers there on the beach with their family before their mother died. They spend the weekend reminiscing, wishing that they'd had more years with their mother, who died so young. On the way back to Paris, Melanie tells Antoine that she remembered something disturbing about their mother. Before she can disclose the secret, they are in a car accident and Melanie is seriously injured.

So. We wait for the secret to be revealed for many, many chapters as Antoine's life back in Paris falls apart. His wife has left him for another man, his children are hellions, and he hates his job. Melanie gradually heals and finally tells him the secret.

I'm not going to tell you the secret. It's not what I expected, and it was kind of a let-down, frankly. It seemed kind of contrived and trite. Perhaps I am a jaded reader who wants a fresher secret.

So, I really liked the book for a long time, but after the secret was revealed I kind of felt a bit manipulated. I don't know why. But I did still really enjoy Antoine's story, which turned out to be happy. Now of course you must read it, as you'll want to know the secret. Go ahead! de Rosnay is a great writer.
Posted by Sarah at SmallWorld at 3:22 PM 3 comments:

The Sunday Salon: January in Review

Added to My Ever-Growing TBR List
Currently Reading
The Things They Carried by Tim O'Brien
Posted by Sarah at SmallWorld at 8:57 AM 5 comments:

This travelogue/memoir by Maarten Troost is neither about sex nor cannibals, particularly, although both make an appearance on the island of Tarawa, where Troost and his partner, Sylvia, spend two years. Bored of life in America and anxious to make a difference in the world and have an adventure in the process. Sylvia and Maarten head off to this remote, romantic island paradise in the South Pacific.

Paradise, it is not. Romantic, rarely. But remote, absolutely. The beaches (AKA toilets) are polluted with an accumulation of historical trash and fresh trash. Diseases are rampant. Food is scarce. Electricity is sporadic. The natives find Sylvia and Maarten endlessly interesting. Mangy dogs—the cannibals—congregate in their back yard. Maarten has a love/hate relationship with Tarawa, but in the end he can see himself settling there forever--if he doesn't hurry up and leave.

This was our February book club pick and got very mixed reviews at our meeting. Four of us actually finished and thoroughly enjoyed the book. Two gave it up around Chapter 11, as the topic just did not appeal to them at all. The other four members just didn't have time to finish reading it, and two out of the four said they would for sure finish reading it, even though our meeting was over. So in all, over half our members really liked the book.

I think Maarten is an excellent writer and very, very funny. Astute, too, but without a biting sarcasm that so often weighs down travelogues in one way or another. I liked Maarten enough that I'd read his next book, Getting Stoned with Savages.
Posted by Sarah at SmallWorld at 3:51 PM 1 comment: