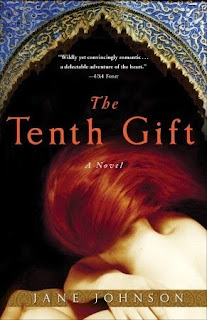 The Tenth Gift by Jane Johnson is our most recent book club pick. We haven't met to discuss it yet, but so far I've heard a few "I liked it!" comments from fellow members. It took me a long time to get into the book—probably close to 100 pages. But I was traveling and reading only a few pages at night, exhausted mentally and physically. Once I found that I had only two days left to read before it was due at the library, I committed myself to sticking with it and found that I became totally absorbed in the story.

The novel flips between two stories that eventually become intertwined. Julia Lovat is a 30-year-old woman who is dumped by her married boyfriend. As a parting gift, he gives her what he thinks is a book of embroidery patterns, written in 1625. The book turns out to actually be a diary of an English woman, Cat, who was kidnapped by Muslim pirates and sold as a slave in Morocco. The Cat entries leading up to her kidnapping were slow moving and confusing to me, but once she is kidnapped, the pace picked up and the direction became clear.

Julia becomes obsessed with Cat's story and travels to Morocco to trace Cat's path and see if the diary really is authentic. In the course of her investigation, she finds that these events really did happen, and a nice discussion of the history of Muslim raiders in the 17th century is included in the novel. I loved the historical perspective. There is, of course, a healthy dose of romance for both Julia and Cat as the novel progresses.

I'm a big fan of historical novels, especially ones that highlight a particular set of events of which I held little or no previous knowledge. I know almost nothing about Morocco and never thought about Christian Europeans being sold as slaves to Muslims. Julia's part of the story was less enthralling but necessary to tell the story. In all, this is an interesting novel for those who enjoy historical fiction/romance.

Posted by Sarah at SmallWorld at 9:04 AM No comments: