Book Review: Interred with Their Bones 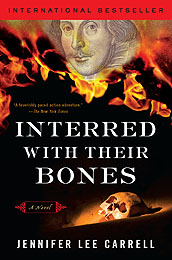 The New York Times called Jennifer Lee Carrell's Interred with Their Bones a "feverishly paced action adventure." Honestly, my only feverish pace was to hurry up and finish it so that I could say "I read it" at book club.

Basically, this book is a hunt for a lost Shakespearean play, coupled with the perennial question: who really wrote Shakespeare's plays? Way too much happened in this novel. I got hung up on the little things, like how do these people afford to fly all around the world? How do they just happen to get flights so quickly? When do they sleep? Why does Kate keep involving innocent people in her quest, knowing they will be murdered? How did Kate go from being a Harvard professor to a director at The Globe in her late 20s? And how can they just leave all these dead bodies around? And has the author actually ever been in a cave? Please. You can't just go crawling around in an unknown cave and stumble upon—oh wait. I don't want to give that away. Actually, I was so perplexed that I don't even know what they found, except more dead bodies.

I know. I'm so trivial, but I have a really hard time becoming involved in a book when I am distracted by such details. Not only were too many things happening that seemed disjointed, but the characters were rather flat and terribly unfeeling. This book is compared a lot to Dan Brown's The Da Vinci Code, and I must say I liked the latter much better. I probably shouldn't admit to that, but there you go.

I guess if you are absolutely enthralled with all things Shakespeare, you might enjoy this for the Shakespearean discussions. But if I hadn't felt compelled to finish this because of book club, I would have thrown it across the floor by page 50. Sadly, I wasted three entire weeks of my reading life on this book—that's how long it took to conquer these 416 tortuous pages.
Posted by Sarah at SmallWorld at 8:50 AM 1 comment:

Email ThisBlogThis!Share to TwitterShare to FacebookShare to Pinterest
Labels: 2013, mystery 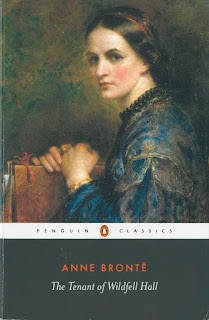 My first read of 2013 was a re-read: Anne Brontë's The Tenant of Wildfell Hall. I read this years ago in a women's lit class during graduate school, and, in fact, wrote what I remember as being a darned good paper on it. Of course that was 25 computers ago and the paper is long since lost.

I'm a big fan of the Brontë sisters, and unfortunately I think Anne gets terribly neglected. Everyone reads (or says they've read) Jane Eyre and Wuthering Heights, but outside of English types and diehard classic lit lovers, I don't think many people know of Anne's amazing novel.

Anne exposes the ugly side of Victorian chauvinism in this novel, exposing the physical and emotional abuse that women endured by their hedonistic, spoiled husbands. The Tenant of Wildfell Hall created quite a ruckus when it was published in 1848 for its boldness and honesty.

The story centers on Helen, a young woman who has married the handsome Arthur, much against the wishes of her guardians. Even before they are married she senses that something is not right, but she goes through with it anyway. Within a month Arthur shows his true colors: he is selfish, excessive, shallow, and he is an alcoholic. (Anne's brother, Branwell, was an alcoholic.) He leaves his young wife for months at a time to party with his friends, returning diminished, ill, and crotchety.

Helen is resigned to a life of a terrible marriage until Arthur starts turning their little boy into "one of the guys," giving him wine and teaching him to curse and demean his mother.

And I'll stop here before giving anything else away. This is a fantastic novel, just as relevant today as it was 150 years ago. I can't help but be amazed at the strength of Anne's writing and her determination and courage in writing such a strong criticism of the double-standards that existed in Victorian society—and still exist today.

Posted by Sarah at SmallWorld at 9:03 AM 4 comments: