Book Review: The Devil in the White City

The Devil in the White City: Murder, Magic, and Madness at the Fair that Changed America by Erik Larson


Two men, two stories, one great World’s Fair. It’s the 1890s, and the city of Chicago has just been given the honor of hosting the next World’s Fair.

Daniel Burnham was the lead architect of the Chicago World’s Fair, and H.H. Holmes was a serial killer who lived in Chicago at that time. Larson narrates these two stories in alternating chapters. Like most readers, I assumed the two stories would connect at some point, but they never do. Nonetheless, I found both stories intriguing and incredibly well researched.

The story Daniel Burnham of the creation of the “White City”—the World’s Fair Park—was interesting but not exactly riveting. While the minutia of all the ups and downs of building the fair got tiresome, I did get a fantastic history lesson. Also, I loved the appearances of famous people like Buffalo Billy, Annie Oakley, Theodore Dreiser, and Helen Keller at the fair.

Of course, the serial killer is always going to be the more compelling story. H.H. Holmes was known as a handsome, outgoing man— literally a ladykiller. While construction of the fair was going on at an incredible pace, Holmes was also working at a fast pace: collecting women, loving them, and then killing them in his specially constructed death building right in the center of town.

Again, the stories really have little to do with each other, but Burnham and Holmes might be consider polar opposites representing man’s capacity for good and his potential for evil. On one side, Burnham is creating this perfect, white Heaven-like city, yet nearby, Holmes has created his own hellish torture chamber. What lies beneath the veneer of whitewash?

View all my reviews
Posted by Sarah at SmallWorld at 1:43 PM No comments:

Email ThisBlogThis!Share to TwitterShare to FacebookShare to Pinterest
Labels: 2018, nonfiction

Every Last Lie by Mary Kubica


The story: Clara, exhausted and overwhelmed with a 4-day-old baby and a preschooler, opens the door one evening to officers informing her that her husband has just been killed in a car accident. Maisie, their daughter, survived. Clara is devastated, naturally. She's in both a post-birth and a post-death haze, forgetting to shower and eat. She's barely in survival mode. Then one night, Maisie wakes up from a nightmare about the accident, and Clara suspects that someone, in fact, murdered Nick. The rest of the novel follows Clara as she searches for the truth, alternating with Nick's story leading up to the accident.

Me: I liked this okay. It was a fast-paced, read-in-a-couple-sittings kind of novel. But so many things about this drove me crazy. I heard way too much of Clara's inner thoughts —ramble, ramble, ramble as she suspected absolutely everyone as Nick's killer. Loose ends were left, well, loose. And what the heck? This woman has a newborn and she's out and about dragging herself and her kids all over town--and LEAVING THEM IN A HOT CAR! Who does that? Nick's inner thoughts were more interesting but his story was just so out there. Way too much going on. But that said, it was entertaining.

View all my reviews
Posted by Sarah at SmallWorld at 9:57 AM No comments:

Email ThisBlogThis!Share to TwitterShare to FacebookShare to Pinterest
Labels: 2018, thriller 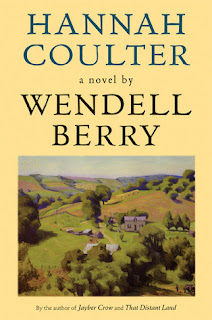 
“Love is what carries you, for it is always there, even in the dark, or most in the dark, but shining out at times like gold stitches in a piece of embroidery.”

This is Hannah Coulter’s story, an ordinary woman who loves, loses, loves again, and loses again, gathering moments and memories along the way. Now in her seventies, she sifts through her life, taking out scenes and examining them, caressing them, sometimes finding joy and sometimes sadness, and then piecing them together.

Wendell Berry understands connection—the connection people have with each other and with the land. He understands the yearnings of the soul; the tender, quiet, beautify, ordinarily moments; the depth of love and feeling. Hannah is connected to a place—to the village of Port William, Kentucky—and to her farm there. (This is one of several novels that take place in Port William.) And she’s connected to people, both living and dead.

Berry's simple, poetic prose brought me to streaming-down-my-face tears—and that rarely happens to me while reading. Or at all, really. I was actually sobbing at the simple beauty of his words and the depth of his understanding. I felt mournful and yet optimistic, and incredibly grateful.

Absolutely one of my favorite books ever for its sheer loveliness and poignancy. I feel better for having read it, more cognizant of the small beauties of an ordinary life.

View all my reviews
Posted by Sarah at SmallWorld at 2:13 PM No comments: