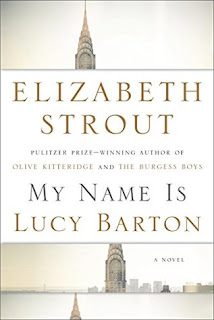 My Name is Lucy Barton by Elizabeth Strout
The story: Lucy Barton came from nothing. She was trash. Her parents abused her, neglected her. She made it out only because she stayed at school as long as possible each day to keep warm and safe, and, while doing so, did all her homework and landed a top scholarship. And then Lucy, a grown woman, is hospitalized for several weeks, and her mother comes to stay with her. They talk, sort of. They talk about other people but never about themselves. Lucy never asks the questions that burn inside her: why did we live like that? Who are you? Who am I? The only one she asks, finally, is “do you love me?”
Me: As a reader, we want to know the details: what exactly happened in that home? What happened to Lucy’s parents to make them so horrible? And yet, the hints of what happened are really enough. This is an incredibly introspective book about a woman who is so damaged that she can’t even come close to pinning down the causes of the damage. She lives on the edge of her childhood, balancing precariously in her adult life. The only way she can come to terms with her childhood is to write about it, and then to write about writing about it. If I sound vague, it’s because the story is vague, and yet strangely satisfying and intimate. It’s a story of prejudices and sacrifice, survival and identity, what we do to children, and what we choose to know. I love sweet, sad, lonely Lucy Barton. 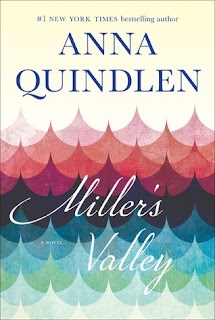 Miller’s Valley by Anna Quindlen
The story: The Miller family has lived in the valley for generations—200 years, in fact. But the state wants to buy up the houses in the valley and flood it to make a recreation area. This is Mimi Miller’s coming-of-age story. The novel begins as she’s a little girl, eavesdropping on her parents’ late-night conversations, watching her older brothers with admiration and adoration, for her brother Tommy. And the story progresses from there, as Mimi moves from an observer of life to a participant in life. Her family is full of people who don’t necessarily say what needs to be said but who love each other deeply. This is really just quite an ordinary story about an ordinary family. It’s a quiet, slow-paced novel with a powerful narrator.
Me: This was a long and winding road. Sometimes my attention wandered. But as the only girl with four older brothers, I understand Mimi so well. I understood perfectly how she was always watching people and how, even when she went out into her own life, she reverted to the role of little sister whenever she was with her family. I was interested particularly in the actual flooding of Miller’s Valley  because this happened around here with the TVA lakes—whole towns were covered. This aspect of the novel was not terribly gripping, however. In the end, I didn’t get the wistfulness I imagine feeling if my whole town was under water, although I did  like the image of all the secrets being washed away. 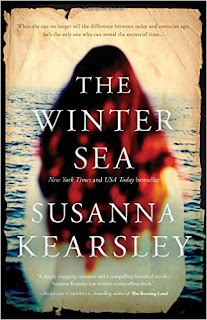 The Winter Sea by Susanna Kearsley
The story: Carrie McClelland is an author of best-selling historical fiction novels, and her newest subject takes her to Slains Castle, scene of a failed attempt of James Stewart to return to his throne. Carrie rents a cottage by the sea and finds herself writing the novel obsessively, almost as if she were a witness to the events in 1708. She suspects that she's triggered some kind of ancestral memory. The story of her ancestor, Sophia, is intertwined with Carrie's own story.
Me: This was incredibly well written and fascinating! I read way too late into a few nights with this one.  Kearsley knows how to tell a story. I honestly have little idea of the historical accuracy of her novel, but other reviewers indicate that she's spot-on. I just loved her characters, the setting, the adventure, and the intrigue. This novel reminded me of how much I enjoy historical fiction, and also that I need to branch out beyond World War II. Highly recommended. 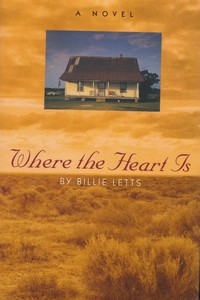 Where the Heart Is by Billie Letts
The story: Novalee Nation is 17, pregnant, and utterly alone in a tiny town in Oklahoma, after having been dumped at Walmart by her boyfriend. She has no money and no place to go, so she makes Walmart her home by night and the city her home by day. She meets a cast of loving characters who don't know her plight at first: Sister Husband, Moses Whitecotton, Lexie, and Forney, among others. When Novalee has her baby in Walmart in the middle of the night, she becomes an overnight sensation: headlines announce the amazing birth of her daughter, Americus. Sam Walton even visits her in the hospital. Sister Husband takes Novalee and Americus into her home, and Novalee, who saw herself as a piece of trash, soon finds that she is loved and admired by a whole village of lovely people.
Me: I loved this book. Sure, it's not a great work of literature, but it's fun, sweet, and full of optimism. There are a few hard scenes, but these add a dose of harsh reality into the novel. I read this many years ago and really didn't remember anything about it. It is our book club's pick for January, and I'm glad I had a chance to revisit it. I don't know if I've seen the movie or not, but I think we'll be watching it again after our book club meeting. Recommended as a most happy, optimistic read.
Posted by Sarah at SmallWorld at 12:00 PM 1 comment: