Book Review: Breakfast at Tiffany's and Other Voices, Other Rooms 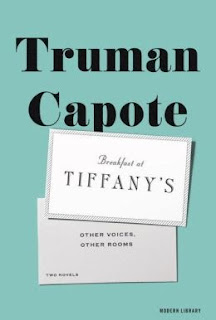 I have had these two novellas on my TBR list forever—at least for 20 years. It was about 20 years ago that Nanci Griffith came out with the album "Other Voices, Other Rooms." On the cover photo, she is holding that book by Truman Capote, so I've always known I need to read it.

So when we were in Paris, we went to the famous Shakespeare and Company, and we each wanted to buy a special book there. I saw a beautiful hardback copy of these two Truman Capote novellas together, and I snatched it up. And I'm glad I did, although I can't say I love either one, as much as I wanted to.

Breakfast at Tiffany's: When I was a little girl, I played "Moon River"—from the movie Breakfast at Tiffany's— on the piano, and I've always meant to see the movie. I still haven't (I know, I know, and it's even on Netflix) but I will soon. The book was not was I expected. To be clear, Capote is a beautiful writer. There is no doubt about that. He is lyrical and lovely. But the novel itself... Somehow I just always see Audrey Hepburn and hear "Moon River," so I wasn't prepared for this very sad and disturbing story of Holly Golightly, a 19-year-old orphan-turned-society-girl who will do just about anything to climb higher up the social ladder. She wraps everyone around her little finger, completely disregarding their feelings, and then discards them when they are no longer useful. She's so often called "endearing" by critics for her eccentricity and flightiness, but I just found her to be selfish.

Other Voices, Other Rooms: One word—creepy. Joel is a 13-year-old boy who hasn't seen his father since he was an infant but must go live with him when his mother dies. Joel, a city boy, must adjust to a bizarre household in a rotting plantation manor that includes his stepmother, creepy cousin Randolph, and two servants, all wrapped up in secrets. This is southern Gothic for sure, and I never knew what weirdness was lurking around the corner. There was quite a bit of a freak show feel to the novel, with those kind of wonderful southern characters that are one step away from an asylum.

I'm glad I read these two short novels finally. I loved In Cold Blood, even though I know it's not "typical" of Capote's writings. I've also read several of his short stories and especially loved the collection The Grass Harp. Tiffany's and Other Voices are not among my favorites of Capote, but I'm still glad I read them.
Posted by Sarah at SmallWorld at 9:25 PM 1 comment:

My book blogging has reached a new low in these past six months, but I'm trying to catch up with regular reviews! I am slowly, slowly catching up, but some of these links will go to amazon.com rather than my own review.

Biggest Surprises
The good: What Alice Forgot. I almost put this one back on the shelf because the jacket description sounded silly, but I absolutely loved this story of what we'd like to keep forgotten.

The bad: Other Voices, Other Rooms. I've been wanting to read this Truman Capote novel for decades—since singer/songwriter Nanci Griffith came out with her album by the same name. She's holding a copy of the novel on the album cover. (Yes, I know there aren't "albums" anymore, but you know what I mean.) I was pretty disappointed in this short novel, which I actually bought with delight at Shakespeare and Co. Bookseller while we were in Paris.

Books Read in Book Club
I must admit that I did not read the other two books for Book Club. Bill Bryson's A Walk in the Woods was one. I detest this book. OK, I actually only read a few chapters of it a few years ago, but I threw it across the room. I just couldn't bear to hear about a guy who can go buy anything he wants to randomly hike the A.T. because he thinks it would be a great story. My husband has a lifelong dream of hiking the A.T., so I have personal issues, I know. The other book was The Paris Wife, the story of Ernest Hemingway and his first wife, Hadley. I'd still like to read this one, but I thought I was going to be absent from book club that month. And while I didn't read The Paris Wife, we did pay homage to Hemingway's digs and neighborhood while we were in Paris.

Movies/Plays from Books
• With my American Lit class, I watched The Crucible and Ethan Frome. I loved both of them, although I've seen them both before. We're going to be getting together this summer to watch To Kill a Mockingbird and a few other classic movies based on American literature.
• We also went to see the play A Raisin in the Sun at the Clarence Brown Theatre at the campus of U. Tenn.  The kids seemed to like the play pretty well. I love hearing them discuss how this actor wasn't what he expected, or how a particular scene was done differently that she imagined from reading the play.
• I watched Sarah's Key finally. I liked it well enough, but it's been years since I read the book. I've heard others say they didn't like the movie at all because it deviated so much from the book; fortunately, I have a short memory for such things.
• I'm really looking forward to seeing The Great Gatsby. I re-read the novel (my old college copy) on the train from Paris to Normandy and loved it almost as much as I did way back when. I think I loved it most in college, but I remember some great discussions from my high school English class as well. We got to France right before the movie was released, and the metro was plastered with movie posters. They're excited in France, too! 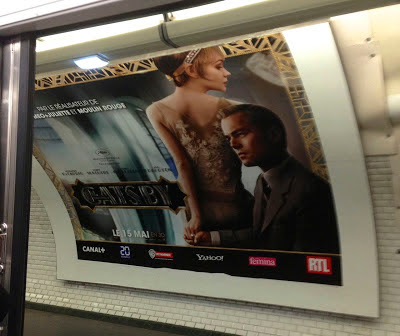 And last, but not least, a few more bookish photos from our trip to France!

And that is my mid-year update! Now, to get back to regular book reviews!

Since starting a year-long World War II study  with my 12-year-old, I've been told many times that I must read Laura Hillenbrand's Unbroken: A World War II Story of Survival, Resilience, and Redemption. I am so glad I finally did.

This is the true story of Louis Zamperini, a punk kid turned Olympic athlete turned bombardier—and then POW. Zamperini's story is an incredible story of strength, faith, and determination on so many levels. After his plane crashes into the sea while searching for another plane, Zamperini and two other men survive and drift in a tiny raft for 47 days, drinking only rainwater, eating birds and an occasional fish, and fighting off sharks. One man dies, and eventually Zamperini and Phil wash up on land, only to find themselves at the mercy of the Japanese.

For the next two and a half years, Zamperini endures unbelievable atrocities at the hands of his Japanese captors. Although nearly all the guards are brutal, Louis becomes the particular favorite of Mutsuhiro "The Bird" Watanabe, a psychotic sadist who finds particular pleasure in torturing Louis. Starved and diseased in general, Louis endures daily beatings that leave him unconscious and psychological battering that leave him terrified but determined to survive.

When the camp was liberated in 1945, the 700 men were skeletons, battered almost beyond recognition. Louis had been pronounced dead years before, but his family refused to believe it. The world was shocked and skeptical to hear that this beloved Olympic athlete was still alive. But Louis has years of torture still to come, as his life after the war was haunted by The Bird.

To say this was an incredible story is an understatement. I don't often weep while reading, but I wept during many parts of this book. What these men endured is just mind-boggling—and how their captors could be so cruel is equally mind-boggling. It is uplifting to see how the human spirit can be so resilient, yet terrifying to imagine the flip side of that: that humans can be so vicious and inhumane.

Don't miss this book. It is an incredible story, and in spite of the subject matter, an incredibly uplifting one.