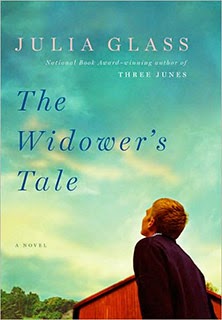 This, my first book finished in 2015, was a really wonderful way to start the year. I actually began reading this novel by Julia Glass in December but had to put it away so I could read our book club's book.

Glass's style feels familiar, like Anne Tyler and Gail Godwin mixed with a little John Irving. (Or maybe it's only the "widow" part that is Irving-esque to me.) I read so much Southern lit that it is refreshing to me to read a novel that takes place in New England. (And to I used to think New York and New England were the hub of the world.)

Percy Darling has been a widower for longer than he was married. He's raised two daughters and is settling at last into a quiet retirement from his career as a Harvard librarian. He lives alone in the historic and secluded house that he and his wife bought when they were newlyweds—until his troubled daughter, Clover, begs him to turn the barn into a preschool. Because he feels that the preschool will give Clover a chance to start over, he agrees—and everything about his life changes

I thought this was going to be a  novel with a bumbling older man and an array of preschoolers who change him, but it was absolutely nothing like that. Percy is a thoughtful, quirky man who adores his daughters and their families but is happy to remain somewhat detached from their lives. The proximity of the preschool, howeveer, forces Percy to participate in life.

There are several stories that are intertwined within the novel: the developing relationship between Percy and one of the preschool moms; the life of Celestino, a landscaper (this one was interesting but never felt like it was fully explored/explained); Percy's grandson, Robert, and his involvement in an ecoterrorist group (sounds strange, but it kind of worked); Percy's girlfriend's life; Ira and Anthony, a gay teacher and his partner; and Percy's daughters and their lives. It sounds like a lot, and at times, I had to backtrack a bit to figure out what was going on; however, all the stories were intriguing. Loosely woven together at times, but intriguing.

Julia Glass is a wonderful writer. I found myself really adoring Percy. The side stories were interesting, but I'm not sure how much all of them contributed to the novel. They were perhaps not integral to the story of Percy, but still interesting. Regardless, I will be seeking out other novels by Julia Glass,  in hopes that I'll meet other characters are richly drawn as Percy.