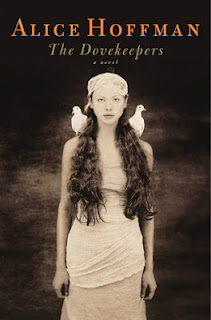 I didn't know what I was getting into with Alice Hoffman's The Dovekeepers, but I had been told by a friend that this was her book club's favorite. And wow! She was right—this was an absolutely stunning novel.

First of all, I didn't realize when I began the novel that all roads were leading to the real story of Masada, a mountain fortress where 900 Jewish rebels held out against the Roman army until it was no longer feasible. I probably skimmed the book flaps, so I was through at least a quarter of the book before it clicked. I had to read up on Masada a bit to get some context, and that helped tremendously.

The Dovekeepers tells the stories of four extraordinary women who end up at Masada: Yael, a young woman whose father despises her because her mother died in childbirth; Revka, the Baker's Wife, who watched her daughter brutally murdered; Azizah, who is more comfortable as a warrior than as a woman; and Shirah, known as "the witch of Moab." The stories are told separately but are interconnected, all touching each other and building to an incredible ending. All but two women and five children killed themselves at Masada. As the reader figures out, two of these four women will survive. But who?

I loved Francine Rivers' Mark of the Lion series, which chronicles a similar time period. I've been immersed in Old Testament stories my entire life, but I love having the culture—the religious and social customs—fleshed out and vividly portrayed. Hoffman is simply masterful at creating this world with all its violence, passion, religious fervor, sorrow, and utter despair.

The book takes work for the reader. You have to really concentrate on the characters and carry them through from section to section, remembering who is who. This is a novel to concentrate on, not to read in snippets here and there. But it is so worth it. Highly recommended, both on a historical level and as a novel of the endurance of the human spirit.

Posted by Sarah at SmallWorld at 8:16 AM 8 comments: