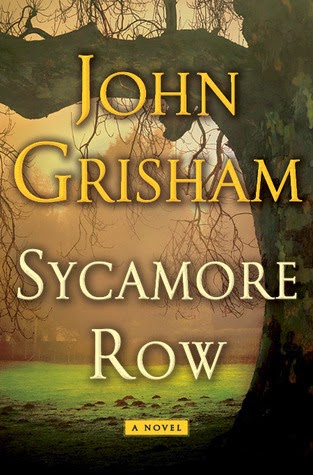 I usually give John Grisham a hard time. In fact, I began the review of the last book of his that I read with "Somebody, please, stop me next time I say I'm going to read the newest John Grisham novel! Why do I keep doing this to myself?"

Don't get me wrong: I admire John Grisham greatly. He is fantastic at what he does. It's just that so many of his books sound exactly the same, and, as I said in my last review, feature "bad dialogue and stereotypical characters." Lawsuit, courtroom, big scandal.

But guess what? I loved Sycamore Row. Honestly, I started reading it because I finished a book and didn't have another one to read. I absolutely loved A Time to Kill, Grisham's first book. Sycamore Row brings back Jake Brigance and Clanton, Mississippi. This takes place several years after the Carl Lee Hailey trial in A Time to Kill. Jake is a struggling small-town lawyer, trying to put his finances back in order after that famous trial. Nothing big ever really happens, until Seth Hubbard commits suicide.

Hubbard was an enigmatic man, reported as being unknowable and cold-hearted. His grown children have nothing to do with him until his death. The kids knew he was rich but had no idea exactly how many millions he was worth. To their utter shock, his handwritten will leaves almost everything to his black housekeeper and specifically demands that his children and grandchildren get nothing.

Jake Brigance, who never heard of Seth Hubbard until his death, is named as the lawyer for his estate in a letter mailed by Seth right before his death. And the legal battle is on between the estate of Seth Hubbard and his greedy, unpleasant children.

Here is why this book was different for me that many of Grisham's formulaic lawyer books: I think Grisham really cared about this book. I think he loves Jake Brigance and took his time in doing right by Jake. It's been 25 years since A Time to Kill.  He's written a lot of law novels in that time period that follow a formula and wrap up nicely, and a couple that are really excellent (A Painted House, The Innocent Man). I think that Grisham's writing is at its best when Grisham is passionate about his subject or the characters. I think all that in-between stuff is just fluff, just a way to fulfill contracts and make a great salary. But his artistry? Those gems come just often enough to keep me coming back. Because when Grisham is good, he's really, really good.
Posted by Sarah at SmallWorld at 2:37 PM