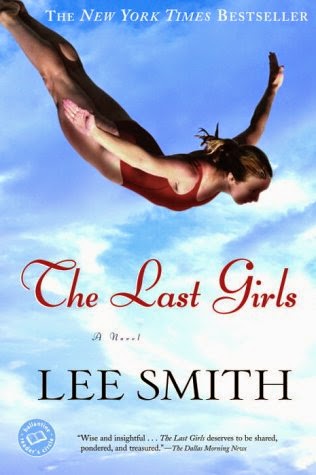 I've had The Last Girls on my TBR list forever, and I grabbed a nice hardback copy at a used book store's "bargain books" aisle a couple of weeks ago.

Lee Smith never disappoints. She's a southern writer who never succumbs to southern clichés, who paints characters with such vivid details that I think I know the person in real life.

So, this novel made me kinda jealous that I never thought of doing this in a million years. I like adventure, theoretically now anyway but certainly in reality when I was 22. In her real life, Lee Smith and a dozen of her friends took a raft trip down the Mississippi River, Huckleberry Finn-style, upon their college graduation. How amazing is that? They really did it!

This fictionalized account takes the trip a step further: 35 years later, the women reunite and take the same trip, except this time on a steamboat, so that they can sprinkle the ashes of Baby Ballou into the river. Baby had been the wildest one in the bunch, and the friends all assume she committed suicide at the end. But who was Baby, really?

The novel focuses on five of the women, reflecting on who they were back in college and who they are now. I really loved this because I am often amazed at how little I think I know my best girlfriends from college now, 25 years later, even though we've kept vaguely in touch and claimed to be absolute soulmates back then and for a decade after. But really, we were still in the early stages of formation back then, figuring out who we were and who we were to become.

Smith's characters might be a bit typecast: the lonely librarian, the mysterious romance writer, the unhappy rich southern belle, the wild Sylvia Plath-like girl, but I didn't care at all. I love stories that wrap up nicely and have hopeful endings, and I especially love how Smith takes unformed college girls and shoots them 35 years into their future. This was a perfect summer read, and I need to go back and see if I've missed any of Smith's other novels.
Posted by Sarah at SmallWorld at 8:51 AM