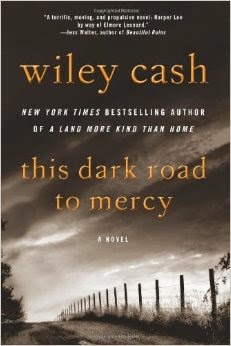 We read, loved,  and discussed Wiley Cash's debut novel A Land More Kind Than Home last year for book club, so I was excited for a chance to read his latest book, This Dark Road to Mercy. First of all, I love the titles to his novels. And I love the name Wiley Cash and how I know it's pronounced here in East TN (Wah-lee). But I love the books, too.

Easter Quillby is the main voice in this novel, although various chapters are narrated by other characters, as well. She's a 12-year-old in foster care as the novel opens. Her mother has just died of a drug overdose, leaving her and her little sister to the system. And then the deadbeat Dad shows up, determined to give his girls a home.

Wade is a former minor league baseball player who is also mixed up in a multimillion dollar robbery. He steals his girls from their foster home in the middle of the night and heads out on the road. He has no idea how to be a father to two girls who don't trust him at all, but somehow he figures it out. He needs to protect them—that much he knows. But he is up against a lot more than he figured. Two men are in hot pursuit of Wade and the girls: an evil bounty hunter and a gentle court-appointed guardian.

Easter is a tough, smart girl who is trying to figure out what all these crazy adults are doing. She's much more than a pawn in the system, though. Her Dad really loves and wants her, her court-appointed guardian is desperate to find her, and her grandparents in Alaska, whom she's never met, are waiting for her. Does what Easter wants matter?

Wiley Cash is a great storyteller. His characters have an almost immediate depth, and I like knowing characters right away. This is a fast-paced novel, one that is hard to put down; I think I read it in a few hours. And now I will look forward to Cash's next novel. He is definitely a Southern voice to follow.
Posted by Sarah at SmallWorld at 9:55 AM

Both books by Mr. Cash sound great. Thanks for bringing them to my attention.

And Merry Christmas to you and yours.

I really enjoyed the first book, but haven't had this new one on my radar at all until I saw your review. Thanks for posting...and helping me plan next year's reading list.