Book Review: In the Sanctuary of Outcasts 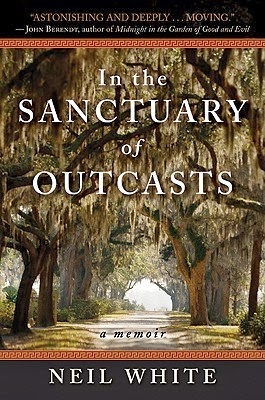 Most of us, upon hearing the terms "leprosy," have some kind of biblical scene play out in our minds: Jesus and the 10 lepers, Miriam's hand white with leprosy, lepers on the outskirts of town. But leprosy still exists. In fact, only in the past 30 years has leprosy been cured successfully.

For over 100 years, a facility in Carville, Louisiana housed individuals in the U.S. who had contracted leprosy, now called Hansen's disease. I was aware of the leprosarium, but I didn't realize that it was still in existence up until the late 1990s; I thought it had closed back in the early part of the 20th century.

This memoir by Neil White opens in 1993, when White, an educated white-collar businessman, is sent to prison for fraud and check kiting. It's a minimum-security prison in what appears to be a plantation. What White doesn't realize and is astonished to discover is that he and his 250 fellow prisoners will be sharing their prison sentences with130 social outcasts: the last lepers in the U.S. The Federal Prison System apparently decided that Carville hospital is the perfect place to house low-security inmates. Evidently, the patients had no voice in the decision to share their home with convicts.

White is terrified at first that he'll catch leprosy. He views the patients with disgust and distrust. If he shakes a hand with one of them, will he catch it? Eventually, he learns more about the disease and begins to form relationships with the patients. He is astonished by their stories. Many of them were taken from their families when they were small children and quarantined in Carville. Even when they were allowed to return home after decades in the hospital, many chose to stay on in the only home they'd really ever known.

In his 18 months there, White discovers all kinds of truths about himself: mostly, that he is a selfish, phony young man who thrives on attention and kudos.  He has betrayed everyone he knows, leaving a trail of disaster for his wife and parents to clean up. He seems, in some ways, relieved to be in prison, away from the mess he's created of his life. It is here in this quiet place that he is stripped of pretense and forced to learn who he really is.

Much of the memoir is about the people White meets, both prisoners and patients.  White encounters  a wide cast of fascinating characters, and he describes them well. Whether they are patients or prisoners, the inmates have one thing in common: they are on the outskirts of society. For the prisoners, there is always a sense of desire: they are anxious for the day they'll be released. They take classes, set up business schemes, write resumes. But the patients just go about their days, used to life in this quiet sanctuary and never expecting anything else. White's favorite person is Ella, a patient who has spent almost her entire life in the hospital. It is from her that he learns to slow down and appreciate life, no matter what the circumstances.

I really loved this book. White provides a fascinating look at a little known part of American history, combined with a fantastic search-for-identity story. Highly recommended.
Posted by Sarah at SmallWorld at 4:27 PM

Email ThisBlogThis!Share to TwitterShare to FacebookShare to Pinterest
Labels: 2014, memoir

I've had this book on my TBR list for a while now. I need to get around to it---and about 100 more books that I want to read.

If you're interested in learning more about leprosy, the book The Volony was great (NF) and the novel Molokai gives a lot if info too. You lose the whole memoir part, but if that aspect intrigued you, I recommend those books.