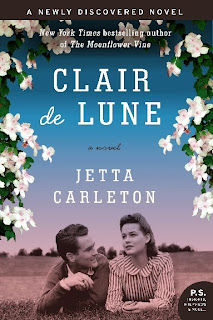 The novel was discovered and published years after Jetta Carleton's death, and in many ways, it feels unfinished. I think Carleton wasn't ready for it to be published and had a lot more to say about Allen. But even with the incomplete feeling, I loved it. Carleton is a wonderful writer, and she beautifully captured the time period and the longing of a young woman's heart. The Moonflower Vine is definitely much better, but I really loved this one, too.
Posted by Sarah at SmallWorld at 8:32 PM