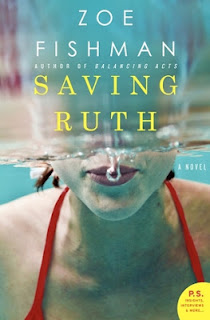 Saving Ruth by Zoe Fishman (not to be confused with Drowning Ruth by Christina Schwartz) was a fun coming-of-age novel about a girl who has finished her freshman year in college and returns home for the summer.

Do you remember that feeling? I do. You've been away from home for 9 months, and when you come back, everything has changed. Your world has slipped. You are caught between becoming someone new, and readjusting to who you were.

It occurred to me after reading the novel that I had somewhat of an opposite life as Ruth Wasserman. She is a dark-haired Jewish girl raised in the midst of blond Baptists in the south; I was a blond Protestant raised among scores of dark-haired Italian Catholics in the north. She headed north for college; I headed south. She was a slightly overweight girl who became a skinny girl at college; I was a skinny girl who put on the freshman 10 in college. But those are just accessories to the real story, that of 19-year-old who is finding her place in the world, and being constantly shocked by the revelations that unfold as she goes along.

I liked the novel. It took me back to that place and time quite easily—Fishman does a great job of capturing the thoughts of a 19-year-old. The rest of the characters were rather flat, but this was really all about Ruth, anyway.

I also enjoyed this novel as the parent of two teens because it reminded me about how much our words can affect our kids. In Ruth's eyes, her mom was "always" commenting on her daughter's weight. In her mom's eyes, she made a few comments here and there. This made me think about what I say to my kids regarding their shyness, for example. I don't ever want to make them feel like I don't love them exactly how they are. It's a tricky balance, and so often in comes down to perception.

The book could have had a lot more depth had Fishman revealed other stories that she barely touched upon: the troubled marriage of Ruth's parents, her brother's struggle as an artist, the issue of growing up Jewish in the south. As it is, it's a nice beach read that will take you back to your own coming-of-age days.

*FTC Full Disclosure - The publisher sent me a copy of the book, in hopes I would review it.

Posted by Sarah at SmallWorld at 10:17 AM

This sounds interesting, I remember that feeling of being between two versions of myself too. I'll keep a look out for this one.

I would like to try this book. It is too bad that it is lacking in depth, but it does seem to have some redeeming qualities. Thank you for the review.

This looks really good! I love the cover.

Also, I tagged you with the Liebster Award on my blog. The post is: http://quixoticmagpie.blogspot.com/2012/06/ive-been-tagged-with-liebster-blog.html :)