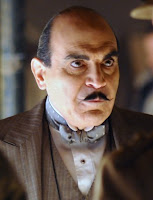 So am I going to go on another Agatha Christie reading spree? Nah. I might pick up another couple sometime when I need a break between heavy reading, but that's probably about it. But I do think I'll encourage my daughter to give Christie a try this summer. Too bad we don't live on a lake.
Posted by Sarah at SmallWorld at 9:12 AM

I told someone else that I plan to go on an Agatha Christie re-read binge someday when I'm really old and have forgotten all of the characters and plots and endings. I, too, have fond memories of reading mystery after mystery when I was a teen and young adult.

Not much words to describe the sheer brilliance of Christie. Not to mention her creation "Poirot" ! Of all the "Poirot" editions this is one which kept me away from my 'general' studies,character presentation,plot sequence,choice of words,superiority of the protagonist,all these nano marvels add to the supremacy and universality of this novel,and this happens to be one of her best ! And do not forget to brush up on your French,you will be needing it,piecemeal. Bonne lecture !