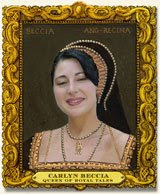 I posted yesterday on the first day of The Raucous Royals book blog tour about how much we loved this book at our house—especially my 11-year-old who isn't a big history buff. Today I am excited to be able to present an interview with Carlyn Beccia, author and illustrator of this wonderful book. Isn't she adorable? I'm quite sure I'd love to have coffee with her; perhaps she'll be doing a book-signing out my way sometime! And then maybe we could go get a pigeon-blood facial together...

Read on to learn a bit more about Ms. Beccia and The Raucous Royals:

Posted by Sarah at SmallWorld at 10:25 PM

That was a great interview -- thank you! It may be a while before my 3 year old is ready for The Raucous Royals, but I'll put it on my list ..

Fantastic interview! And I cannot wait for the next book.

You create good material for community.

Let me introduce other material that may be good for net community.