With Memorial Day in the U.S. this coming Monday, I thought it would be appropriate to focus on the military. Either share your favorite book on war or movie on war and why. Provide a clip from the movie if you'd like or a passage from the book that shows us why you it's your favorite book or movie. Or do both. OR choose your own military theme, for example, if you have a relative or friend in the military and you would like to send them a video or a message of thanks, do that on your blog. OR do all three. The book and movie also don't have to be "patriotic" necessarily. For example, one of my favorite fictional books on war is Johnny, Get Your Gun by Dalton Trumbo.

My Dad is veteran of both World War II and the Korean War. Here's a post I wrote last year on Memorial Day— To War—about when my Dad shipped out to Korea. And here's a photo of my Dad and his Dad in about 1943. 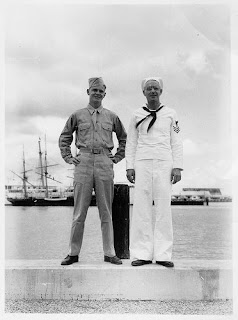 My Granddad went into the Navy in 1942 as an apprentice seaman at the old age of 41. My father enlisted in 1943 at age 18. When the troop hit the beaches in France, he was a PFC (private first class) in Ft. Sill, OK at The Artillery School, assigned to a "flash-ranging" platoon (forward observers—FO). Back to Georgia, promoted to buck sergeant and headed out that September on what was once the luxury liner USS Manhattan, stripped down to hold 20, 000 troops. They crossed the Atlantic without escort (the story was that they were so fast that no U-boats could find them) and landed at Liverpool. Eventually they crossed the English Channel and landed on Omaha Beach. There was all kinds of wreckage there from 3 months earlier.

His battalion found out that their equipment has been on a different ship, which had been sunk, so they pitched tents in Normandy and waited for replacement equipment. When it arrived in early December, they headed for Belgium and the front. Almost there they got word of the Bulge fighting and that their sister battalion, 287 FA Ob, had been captured at Malmedy and butchered—which didn't help their morale.

My father writes: “We were not a bunch of heroes. Mostly did counter-battery work—locating German artillery, heavy mortars, rockets and tanks and directing fire on them. Wound up on the Elbe, north of Magdeburg. Crossed the Elbe to finish things off at Berlin; called back to the west bank orders of Ike; sat there and watched from about 30 miles out the fires of Berlin; watched the remnants of the Wehrmacht coming west, flowing south east of the Elbe. Watched the Russians chasing them. Finally, surrender.”

The war wasn’t over for my father, though. Because he had joined the fighting late, he was earmarked for continuing service by going to Japan. He was sent home in July with orders for 30 days leave, then to report to west coast and passage to the Far East. I have often imagined —but can’t possibly—how he felt when they landed in Boston harbor to the cries of newsboys hawking papers with headlines "Second Atom Bomb Dropped on Japan!" I imagine all those days crossing the ocean, knowing that, though he was done battling in one continent, he must barely take a breath and then head off to another. And then, to have the atom bombs be his saving grace. It has always been hard for me to read Sadako and the Thousand Paper Cranes, because on one hand I am horrified and terribly sad, but on the other hand….my father.

Korea is another story, several years later. But to tie this all back to books: I am a voracious reader of World War II-era literature. I'm sure I couldn't recount all the books I've read about this era, but here are a few of the more recent ones:

I know that barely touches the surface of WWII literature. A fantastic site for more reading material is at War Through the Generations.
Posted by Sarah at SmallWorld at 10:04 PM

What a great picture of your dad and your grandpa. I bet they share an uncommon camaraderie due to their shared military experiences.

I know what you mean about feeling conflicted about the bomb. I live in HI and have visited Pearl Harbor a number of times, and it's always a bit weird for me. My grandma is of Japanese decent, so watching the enemy attack and rooting for their defeat feels like I'm being traitorous to my ancestors. It's an odd thing to try to reconcile.

I love that photo! What a great story to share with the rest of us. I've read quite a few of the books you listed and always find this time period extremely interesting.