It’s been decades since I last visited Elizabeth and Mr. Darcy between the pages of Jane Austen’s Pride and Prejudice. I believe I was in my early 20s when last I read it, and I haven’t even watched any of the Pride and Prejudice movies, I confess. It’s not that I didn’t love the book or Jane Austen, it’s just that I read so very much of Austen, the Brontës, and the like at a particular season of my life that I hadn’t the energy to return.

But I do have fond memories of all of them. I’m going to be teaching Pride and Prejudice in the upcoming year during British Literature, so I thought I’d better reacquaint myself with it. Vacation is a wonderful time to read classics. I had ample time to get lost in the story without interruption, especially on an 11-hour car trip.I love re-reading a novel and having it seem completely new. I really hardly remembered any of the story at all.

Posted by Sarah at SmallWorld at 6:34 AM 4 comments: Links to this post

Book Review: The Remains of the Day (Kazuo Ishiguro)

The Remains of the Day is my second Kazuo Ishiguro novel, and it is utterly different than Never Let Me Go. Or is it?

The latter is set some time in the future; Remains of the Day dwells in the past. But both focus on people whose sole job it is to serve others, even when it means sacrificing—or not being allowed to have—a life of one’s own.

Mr. Stevens is a butler who has taken tremendous pride in his job—well, his life’s work. For him, there is no higher ambition than to serve his master perfectly. To be invisible at just the right moment, and visible at just right moment. To see a need before it is spoken, to flawlessly manage a household, to be prepared for any request at any moment. His own wants and desires are never considered, and he can’t imagine why any servant would want more than this life.

For 30 years Stevens served Lord Darlington until the master died and his estate was purchased by an American. Stevens can’t quite figure out his new master. He is unlike an English gentlemen and has a curious method of dealing with Stevens, who struggles to learn the art of bantering.

His American master suggests that Stevens needs a vacation and insists that he take a week or drive around the country. Stevens, though reluctant at first, obliges, and his adventures begin. His journey, though, gives him ample time to reflect upon his years of service, to question his motivations and decisions, and to perhaps concede that his master was, after all, terribly flawed—and Stevens as well.

I absolutely loved this book. We want to shake Stevens into seeing what is before him. I put the movie on my Netflix queue immediately and can hardly wait to see it.

Other Reviews of The Remains of the Day

Linked up with The Saturday Review of Books

Posted by Sarah at SmallWorld at 8:52 AM 4 comments: Links to this post 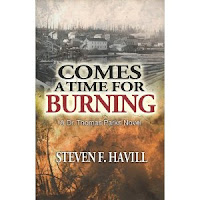 Cholera strikes the people of Port McKinney, Washington, in 1892. Drs. Parks and Hardy, both New Englanders fairly new to the West Coast, race to stop the disease before it wipes out the entire town.

The writing itself isn’t great— somewhat choppy. The characters are flat and rather stock, with stories hinted at but not revealed. But I still enjoyed the book for its historical perspective. I’m fascinated by epidemics, by all those grave markers in various cemeteries we’ve visited where whole families are buried, taken by cholera or some other disease.

The author did a great job of detailing the disease itself; I’m sure I felt twinges in my stomach a few times when he described the smells of cholera. The techniques used by the doctors were also fascinating. I'm putting The Strange Case of the Broad Street Pump on my TBR list. Its description reads: "In this gripping book, Sandra Hempel tells the story of John Snow, a reclusive doctor without money or social position, who--alone and unrecognized--had the genius to look beyond the conventional wisdom of his day and uncover the truth behind the pandemic. She describes how Snow discovered that cholera was spread through drinking water and how this subsequently laid the foundations for the modern, scientific investigation of today's fatal plagues." Sounds fascinating!

Linked up with Semicolon's Saturday Review of Books

Posted by Sarah at SmallWorld at 8:45 AM 3 comments: Links to this post