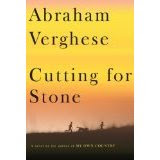 I don't know if it's possible for me to do this book justice in a review. I have to say, right off the bat, that I am a huge fan of Abraham Verghese. I became enamored with him in the early 1990s with his memoir My Own Country. Turns out that Dr. Verhese and I were living in the same town in upper East Tennessee (Johnson City) at the same time—in the mid-to-late 1980s. I was a college student, and he was a young doctor specializing in infectious diseases at the Veterans' Hospital, where I used to take walks. About the same time that most of the U.S. was becoming acutely aware of AIDS, Dr. Verghese was discovering a huge pocket of AIDS cases in upper East Tennessee, and he became the local AIDS expert. My Own Country is the powerful book that came out of his experiences dealing with people, mostly men, coming home to the mountains to die. Verghese is a tremendous writer, full of lyrical medicine and poetry.

I was excited several years later when The Tennis Partner was published. This memoir details his relationship with his medical student and tennis partner, who, like many in the medical profession, becomes a drug addict. Again, Verghese's writing is simply exquisite. I was privileged to get to hear Dr. Verghese read at a small bookstore in Knoxville after The Tennis Partner was published, and I have to say that he reads just like he writes. I was smitten all over again.

And now 10 years later, Dr. Verghese gives us his first novel, Cutting for Stone. This is a magnificent novel, following the short life of Sister Mary Joseph Praise and then the longer ones of her twin boys and their adoptive family, from India to Ethopia to New York City. As in all of Verghese's works, the setting is a hospital, and medicine is woven intricately in with the story of this family. Verghese does wonders with his characters. They are all practically visible and nearly all loveable, in spite of their mistakes. (And if they aren't loveable, than at least we understand why.)

I really can't do this book justice in a review. Verghese is so eloquent, his subject matter fascinating, the characters so rich: you just have to read it. Toward the last quarter of this book, I almost dreaded reading it because I didn't want it to end. I seriously hope we don't have to wait another decade for Dr. Verghese's next book.

**ADDENDUM** I had an email from Abraham Verghese himself in response to my review! My heart went pitter-patter, truly! And he sent me this link to a fantastic review by Simon Schama of Financial Times.
Posted by Sarah at SmallWorld at 7:49 PM

This does sound good. He sounds like a very clever man. That must seem unreal that you were living so close.

I've never read any of his books but after your beautiful review I'm putting Cutting for Stone on my TBR list!!