Books Read in May and June 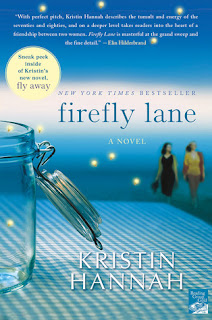 Firefly Lane by Kristen Hannah.
The story: Kate and Tully are best friends, growing up together on Firefly Lane. Kate is average but has a fabulous family; Tully is gorgeous but has no family. Kate wants an ordinary life; Tully wants fame and fortune. They novel spans their relationship from early teens through their 40s or 50s: through first loves, college, career, lost loves, parenting, etc.
Me: Meh. I couldn't get attached to either of the main characters or even to any of the characters. There was too much backstory left untold to make some of the more potentially interesting plot lines substantive. It was predictable and embarrassingly silly at times. It's hard for me to wrap my brain around the fact that Kristen Hannah wrote The Nightingale, which was phenomenal, and also wrote this. 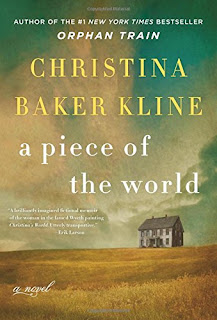 A Piece of the World by Christina Baker Kline.
The story: Kline imagines the story of Anna Christina Olson, subject of the iconic painting "Christina’s World" by the  Andrew Wyeth. Olson and her brother are living by themselves in the old family farmhouse without water or electricity when Wyeth stumbles upon them and sets up his summer studio in their home. Christina's life has been a series of disappointments, from contracting a crippling disease as a little girl to losing her only love. Wyeth brings beauty and grace to Christina's world and allows her to see herself through different eyes. Wyeth's painting turns the once invisible Christina into a lasting treasure.
Me: It was hard to get into at first but I began really enjoying it about midway through. I didn’t know what was wrong with Olson— neither did she— and would have understood more had there been more detailed description as her disease began. Kline is a wonderful storyteller, and eventually I became completely immersed in Christina's world. Her own personal landscape was gray and tired, but Wyeth saw something completely different. I love that someone so ordinary could become a muse to someone so extraordinary, and thus become extraordinary herself. Highly recommended. 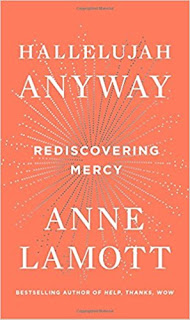 Hallelujah Anyway: Rediscovering Mercy by Anne Lamott.
I had the pleasure of hearing Anne Lamott speak recently. She was partly reading from Hallalujah Anyway and mostly just talking. She was truly wonderful. What an absolute privilege that evening was! Anyway, this memoir of sorts is Lamott's exploration of the concepts of grace and mercy. It's just a lovely book full of thought-provoking, comforting musings.
• “The hard silence between frustrated people always feels cluttered. But holy silence is spacious and inviting. You can drink it down. We offer it to ourselves when we work, rest, meditate, bike, read. When we hike by ourselves, we hear a silence still pristine with crunching leaves and birdsong. Silence can be a system of peace, which is mercy, easily offered to a friend needing quiet, harder when the person is one's own annoying self.”
• “My parents, teachers, and the culture I grew up in showed me a drawer in which to stuff my merciful nature, because mercy made me look vulnerable and foolish, and it made me less productive.”
• "Forgiveness and mercy mean that, bit by bit, you begin to outshine the resentment. You open the drawer that was shut and you take out hte precious treasures that you hid there so long ago, and with them, the person who marvels at tadpoles, who pulls for people to come clean and then have a second chance…"
It sounds trite, I know, but Lamott truly challenges me to be a better person: more compassionate, more forgiving, and more merciful. 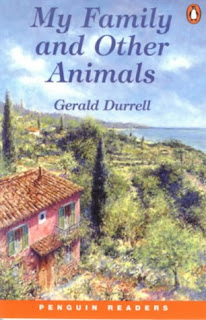 My Family and Other Animals by Gerald Durrell.
The Story: When Gerald Durrell was 10 years old, his family (his three older siblings, all in their late teens or early 20s, and his widowed mother) left dreary England for the sunny island of Corfu. Gerry is left essentially on his own at first: free to wander the island, make friends with the locals, and explore the incredible plant and animal life. Every now and then, his family would suddenly remember Gerry and decide he needed formal education, so a occasional tutors were hired—and they learned as much from Gerry as he did from them. Durrell remembers his island days with beautiful writing, hilarious stories, and incredible detail.
Me: I loved this book. It was our June book club pick and a particular favorite of our book club member's 18-year-old son. And I can completely see why: as I was reading this book, I saw Sam, her son, on every page. Durrell was bursting with curiosity as a young boy. He simply observed the world around him, soaked in every detail, befriended everyone, watched every animal-- insects, birds, reptiles-- adopted all kinds of pets, and wreaked havoc on his more "mature" siblings. He was simply delightful, as was this memoir. I laughed a lot and really wanted to re-do by kids' childhood by living off the grid. Lovely book. 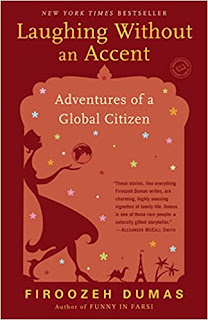 Laughing Without an Accent by Firoozeh Dumas
The story: Firoozeh Dumas came to America from Iran as a young girl, and she recounts the hilarious and poignant story of her family's experiences in America in her memoir Funny in Farsi. Laughing Without an Accent continues with more vignettes of her Iranian family and their cultural conundrums, the often confusing intersection between American and Iranian customs, and her own place as a citizen of the world at large.
Me: I've been meaning to read this book for years, so I was excited when a former student loaned it to me. Whenever I teach World Literature, I begin with Funny in Farsi. My students almost always love this memoir-- and always ask me if I've read Laughing Without an Accent. I'm glad I can finally say I have! This collection of stories is nearly as wonderful. Dumas is a humorist but she has these moments of truth that just hit hard. At the core of her memoirs is the intense love of family but also the theme of "why can't we all just get along?" Highly recommended. 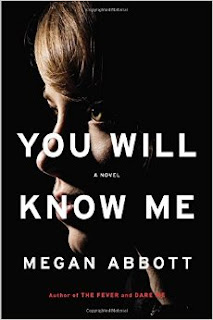 You Will Know Me by Megan Abbott.
The Story: The Knox family has only one focus: getting Devon, their teenage daughter, to the Olympics. She's an incredible gymnast and perfect child, and everyone in the community is rooting for her. Well, rooting for her while seething with jealousy. And then the assistant coach's boyfriend dies in a violent accident, and everyone is a suspect. Secrets start piling up and relationships crumble, but the Knox family is determined that nothing will get in the way of Devon's success.
Me: Oh, this was good! It was all very riveting and suspenseful, with plenty of twists and turns and secrets revealed slowly. It was a quick, creepy read. 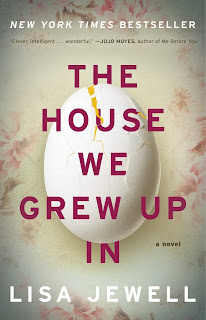 The House We Grew Up In by Lisa Jewell.
The story:  The Bird family used to be the perfect family. Lorelei was a creative, free-spirited mom to Meg, Beth, and twins Rory and Rhys. But then something happens to the Bird family. (The tragedy is revealed about midway through.) Once carefree and joyful, the tragedy leads to the demise of the family. They drift apart and then become disdainful of one other. Once best friends, even Meg and Beth refuse to speak to one another, and Lorelei dies alone, a hoarder in their once lovely home. The book shifts between the present, when the children are middle-aged, and the past, as we find out what actually happened-- and why.
Me: I liked most of the book, although a lot went on. Like, really a lot. Probably too much-- it became tangled a bit too much. But somehow it was all quite interesting, and I did get wrapped up in the characters. My biggest complaint is that the mystery finally revealed at the end of the novel was odd and didn't really fit with the rest of the novel. It was just plain weird. So... good, but not great. 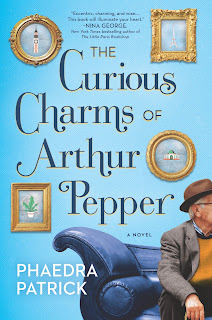 The Curious Charms of Arthur Pepper by Phaedra Patrick.
The story: Arthur Pepper has been a widower for one long and painful year. He goes through his days with precise and painstaking routine.  On the one year anniversary of her death, he decides he really must go through her belongings, and while sorting through her clothes, he discovers a charm bracelet that he's never seen before. He's puzzled but intrigued. Where did the bracelet come from, and why was she hiding it from him? The first charm leads him on a journey to uncover a life he never knew about—her life before she met Arthur and settled down. While he discovers who Miriam once was, he also discovers who he really is—and that there is a lot more life to live.
Me: I loved this book! It was our July book club read, and everyone agreed that it was wonderful. It's reminiscent of both A Man Called Ove and The Unlikely Pilgrimage of Harold Fry—two of my favorite reads last year. Like Ove and Harold, Arthur is a lost, grumpy old man who discovers incredible joy—and the incredible writing in all of these novels just makes it all incredibly delicious. Highly recommended!

Posted by Sarah at SmallWorld at 5:07 PM

Thanks for these reviews. I always enjoy finding out what you are reading!

I just zoomed over to my library's web page and reserved a copy of A Piece of the World. Andrew Wyeth encountered the Olsens here in Maine -- not far from where I live, actually, so this painting has always seemed so haunting to me.

And I was happy to hear good things about Anne Lamott's new book. Some have said that it seemed kind of thrown together and is following too quickly on the heels of her previous book.

Actually, you have read some really great books in May and June!