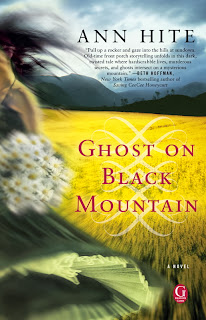 The novel begins with Nellie, a 17-year-old Appalachian girl who falls in love with the wrong guy, Hobbs Pritchard. He sweeps her away from her mother and the only home she's ever known and takes her way up the mountain. She quickly discovers that he is Black Mountain's resident tyrant, hated and feared by everyone. Left alone in their big house while Hobbs goes off to do his dirty work, Nellie begins encountering ghosts who seem to want to warn her, not harm her.

Nellie is a sweet, likeable girl married to pure evil; fortunately, the people on Black Mountain, although suspicious of her at first, realize this and rally around her eventually. But I can't reveal any of that part of the story without spoilers.

The second part of the book is told from various POVs, including Nellie's mother and Hobbs's girlfriend. Nellie comes back at the end to tell the rest of her story—and her daughter's story. The novel is filled with all kinds of twists, sprinklings of Appalachian folklore and traditions, rich characters, and lyrical storytelling.

With this novel, Ann Hite joins Amy Greene (Bloodroot) and Sharyn McCrumb (She Walks These Hills) as a distinctive Appalachian voice, one who can flawlessly weave together ghosts, folklore, and everyday characters in a book that the reader just doesn't want to put down. Highly recommended.


Posted by Sarah at SmallWorld at 8:43 AM

Wow! Thank you. I'm so excited you guys liked my book. If you ever decide to read The Storycatcher--the second novel--let me know. I can skype or call in. I'm honored. Ann