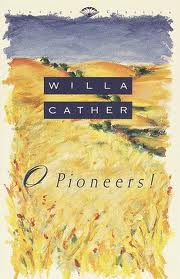 I'm teaching Willa Cather's My Antonia for American Lit right now, and I realized that I've never read her other most discussed novel, O Pioneers. I downloaded this copy free for my Kindle app, although I'd gladly buy it in hardback.

Such a lovely, lovely little novel. O Pioneers has the same wistful, yearning mood as My Antonia, and the main character, Alexandra, reminds one of Antonia. Both are stories of the power of the land and the struggle of immigrants, taking place in Nebraska at the end of the 19th century. Of the two, O Pioneers has the happier ending. (My students are just now reporting that "My Antonia ends so sad!")

O Pioneers centers on Alexandra Bergson, the daughter of a Swedish immigrant who becomes a wealthy landowner because of her own business acumen and foresight. Her older brothers are hard workers but lack creativity and ambition. Her younger brother is her pet—her hope for integrating into America. He goes to college and does well, and Alexandra has great hopes for his future. Of Emil, Cather writes:


"Out of her father's children there was one who was fit to cope with the world, who had not been tied to the plow, and who had a personality apart from the soil. And that, she reflected, was what she had worked for. She felt well satisfied with her life."

Things don't end up quite the way Alexandra hopes. Cather portrays Alexandra as an incredibly strong, multidimensional woman. She is well respected for her business dealings, yet loving and tender with her younger brother, the neighbor women, and Carl, her childhood friend who comes back to her in middle age.

Cather is a beautiful writer, and her descriptions of the simplicity and power of the land are amazing:

"She had never known before how much the country meant to her. The chirping of the insects down in the long grass had been like the sweetest music. She had felt as if her heart were hiding down there, somewhere, with the quail and the plover and all the little wild things that crooned or buzzed in the sun. Under the long shaggy ridges, she felt the future stirring."

O Pioneers! is a sad but beautiful novel, the kind that makes you strangely yearn for a time long ago, in spite of the hardness of the life. Highly recommended.
Posted by Sarah at SmallWorld at 8:31 AM

I've only read DEATH COMES TO THE ARCHBISHOP by Cather, but I really loved it. I need to get to her others soon, and I think I may start with this one. Thanks for the review!