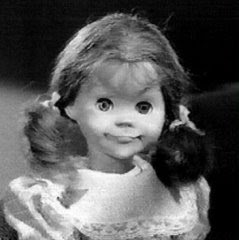 I.
"The Living Doll": It was without a doubt the scariest episode of The Twilight Zone. Talking Tina haunted my childhood in an I-love-to-be-scared kind of way. "My name is Talking Tina, and I'm going to KILL YOU!" my friends and I would shriek and collapse in the curious, delightful mix of hilarity and terror.

II.
My mother says I cried and hid when my grandmother brought me, age 2, the life-sized doll I later named Maria. I don't remember ever being afraid of Maria; I suppose I quickly grew taller than she. Maria was soon joined by a nearly bald baby doll, whom I named Betty Ann after the teenage neighbor who handed down her baby doll to me. And there was always Thumbelina, with the sweet, slightly dirty face and yellow hair.

Decades later my daughter finds Maria and Betty Ann in my mother's attic and brings them home. I dream of Maria that first night. She is life-size—taller than I am—and dancing stiffly. She holds her arms straight out, demanding that I join her dance. I wake up, a scream caught in my throat and heart pounding.

III.
The Japanese doll gave me nightmares. A visiting professor brought her as a gift for me. Beneath her red kimono she was just a purple plastic cross, and her head popped off too easily off its stick neck. But it was her white face that terrified me, and the way her head rolled under the bed so alive. Sleeping, knowing that white head was under my bed, was impossible. But to get out of bed and find her was even more terrifying. She trapped me for a whole night. In the morning my brother fetched her head and stuck it on his finger, chasing me over shining hardwood floors, his socks skating and tiny teeth so white and clean.

More thoughts on "Toys" here at Sunday Scribblings.
Posted by Sarah at SmallWorld at 8:31 PM

I was never much of a doll lover myself, and these scary stories make me realize why!

So... have you worked up the nerve to try one of the Chucky movies...?

Chilling. I didn't realize toys came in so many forms! I don't remember having anything I was scared of...and...I admire your writing.

My daughter had a doll whose arms and legs moved when you wound it up so it could crawl.It completely freaked her out when she was little and we had to get rid of it. Now she dresses in her own style of romantic goth. He he.
I instantly thought of Chucky when I read your post too.

Being a boy and having no sisters dolls didn't really enter my life. I'm quite pleased really!

Haha...maybe I never felt this way because I never had "nice" dolls. Generally, my dolls were Barbies...and I could either feel sorry for them (poor girl with her permanentlly arched feet tiptoeing around) or I could put them in their place by using markers to color on them or giving them "fashionable" haircuts...by the time I got done with their make-overs, they were more pathetic and laughable than scary!

Wow, I never thought of dolls as being scary except maybe live ones

The oriental doll sounds downright creepy - having nothing but a cross for a body. Hard for a little girl to cuddle that :)

you should check out my artist friend, sharon bell...she creates wierd dolls out of old dolls.